Hanukkah is one of the most significant periods in the Jewish calendar, celebrated by millions worldwide. Also known as the Festival of Lights, it is observed by lighting one candle on the menorah candelabrum each day. 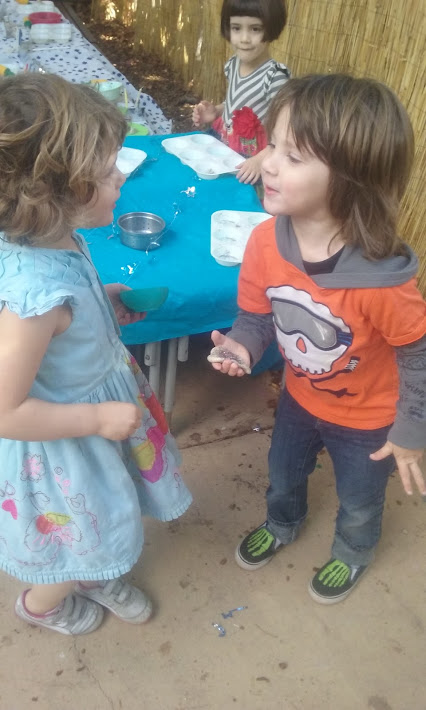 Hanukkah is celebrated in November or December in the western calendar. The holiday begins on ninth month of the ecclesiastical year on the Hebrew calendar, and is celebrated for eight days.

Observing the Jewish peoples’ struggle for religious freedom, the word Hanukkah means “rededication”. The festival marks the rededication of the Second Temple in Jerusalem during the second century BC, when the Israelites, led by the Maccabees, gained victory over the Greek-Syrian oppressors. Hanukkah is celebrated in a number of ways, from the traditional lighting of the menorah to special foods and games.

As Hanukkah celebrates the miracle of oil, it is traditional to eat fried foods such as sufganiyot – jam-filled doughnuts. Traditional foods include potato pancakes, known as latkes in Yiddish, particularly among Ashkenazi families. According to rabbinic literature, there is also a tradition of eating dairy products, such as cheese, during Hanukkah. 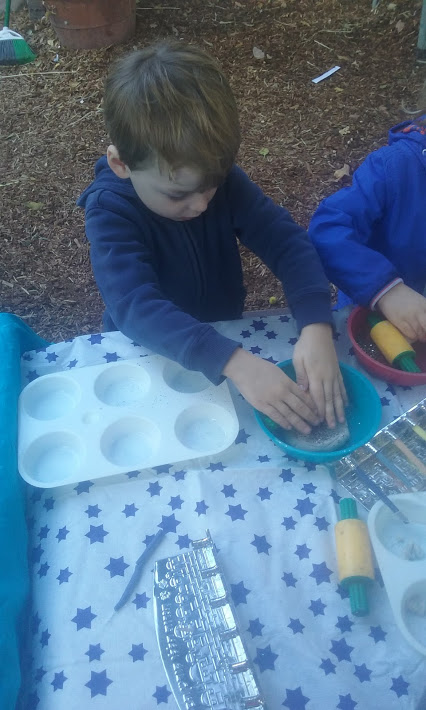 For this activity, we talked about these different fried foods. We then created a number of them out of play dough, and pretended to cook and serve them to our friends! 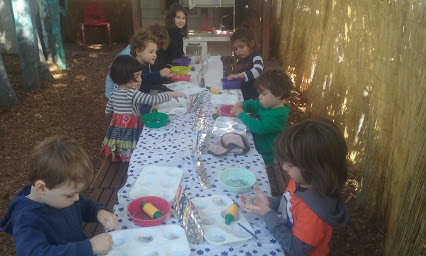 Cooking and dramatic play activities are not only a fun, engaging activity for children, but one that can be used as an important teaching and development tool. 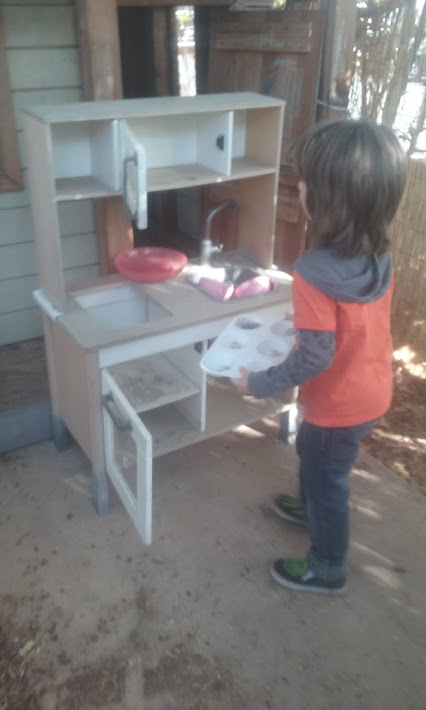 For instance, the act of following a recipe or creating a dish can encourage self-direction and independence, while also teaching children to follow directions and use thinking skills to problem solve.

Also, when children come together in a dramatic play experience, they are learning many things! They not only negotiate roles, but cooperate and listen to one another to bring their ideas to life. And by recreating some of the experiences they actually face, they learn how to integrate new material with previous learned information.

Fine motor skills encompass a variety of tasks that color all aspects of our lives. For little ones, these skills enable them to thrive in their daily environments. 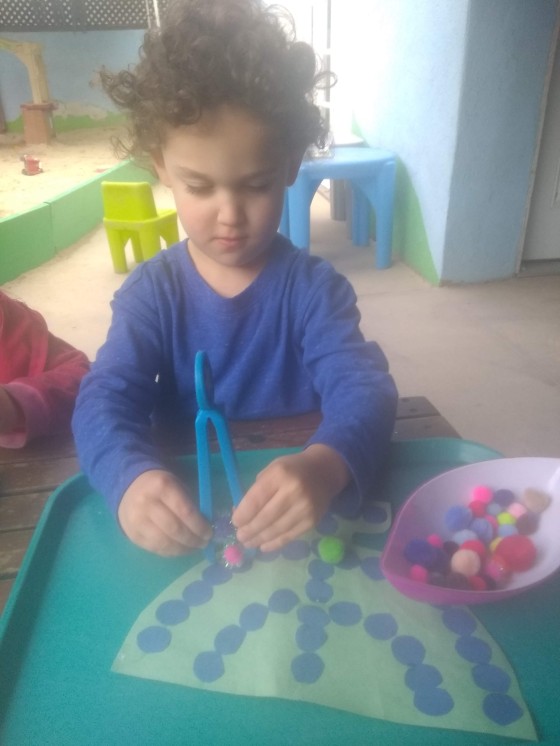 These skills are not only the precursors to writing, but include a variety of tasks, including manipulating objects, operating scissors, opening and closing lids, turning pages, and completing puzzles. 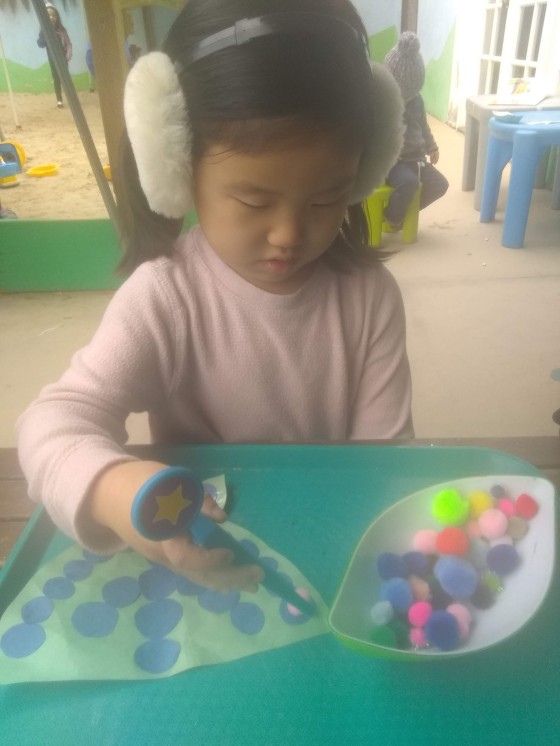 Because we have been talking about the menorah, your little one participated in an activity that honed in on these skills.

They had so much fun transferring pom poms to their menorahs and laughing with their friends! 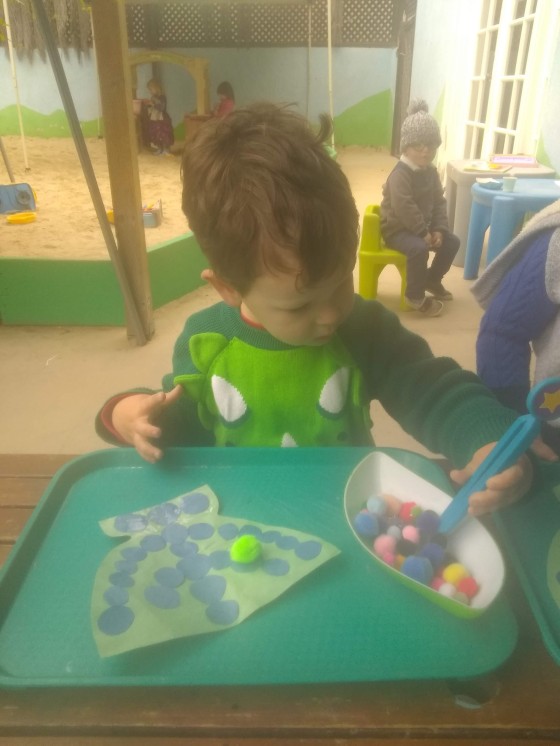 Using play dough (or in fact any type of dough) with young children is beneficial in so many ways. The malleable properties of play dough make it fun for investigation and exploration as well as building up strength in all the tiny hand muscles and tendons,  making young writers ready for pencil and scissor control later on. For this activity, we used play dough and menorah play dough mats to teach your little ones about the menorah.

Using their hands, they practiced rolling their play dough into candles to put onto their menorahs! 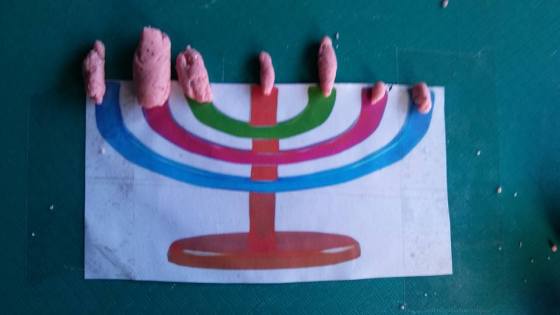 When finished, students counted how many candles they had. 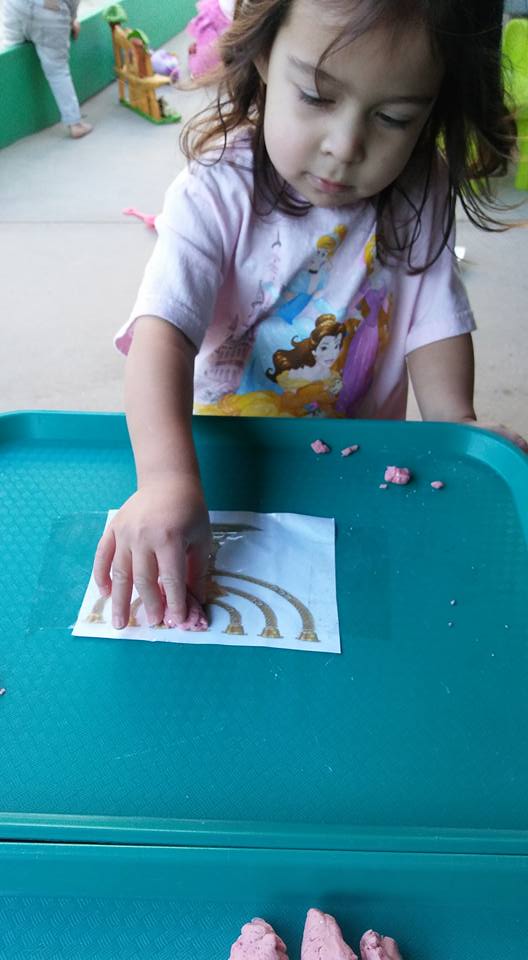 The dreidel, known in Hebrew as a sevivon, dates back to the time of the Greek-Syrian rule over the Holy Land—which set off the Maccabean revolt that culminated in the Hanukkah miracle.

Learning Torah was outlawed by the enemy, a “crime” punishable by death. The Jewish children resorted to hiding in caves in order to study.

If a Greek patrol would approach, the children would pull out their tops and pretend to be playing a game. By playing dreidel during Chanukah we are reminded of the courage of those brave children.

The tactile experience (touching the letter with your finger) is important for building a memory trace. This enables students to acquaint the name of each letter with a visual representation for the letter sound.  For a child who is struggling with their letters, the sooner they can integrate the sound of the letter with what it looks like, the sooner their writing contains more meaning for them.

For this activity, we talked about the letter D. We discussed words that begin with this letter; words like dinosaur, dirt, dreidel, and dog that we pronounced and then broke up into their component parts. Using our fingers, we moved to the ground, where we carved (with some help from Miss Carrie) letter Ds into the dirt, and then traced them with our pointer fingers.

For this activity, we used pieces of foam to construct the letter D. All of the alphabet letters include either straight lines, diagonal lines, and/or big and little curves and this experience helped students perceive how these components fused together to create a larger picture. Before preschoolers begin to read or spell, they must learn the letters of the alphabet and the sounds they represent. Learning to pair letters and sounds helps prepare preschool children for later reading. 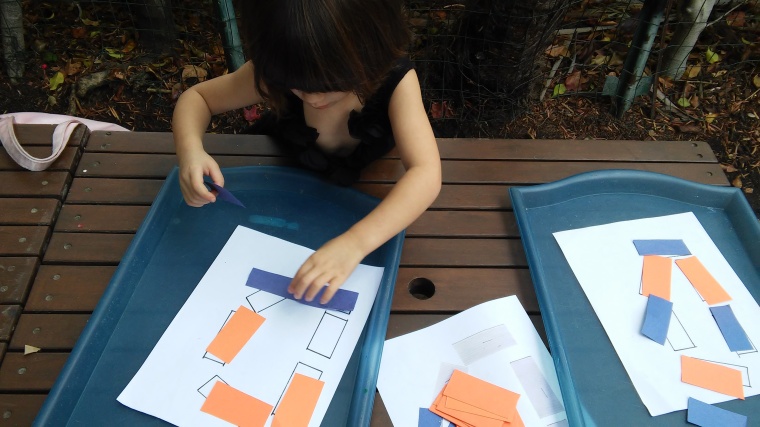 In other words, children learn by doing. Play provides the foundation for academic learning.

To incorporate the menorah into our Hanukkah theme, we placed candles into real menorahs! 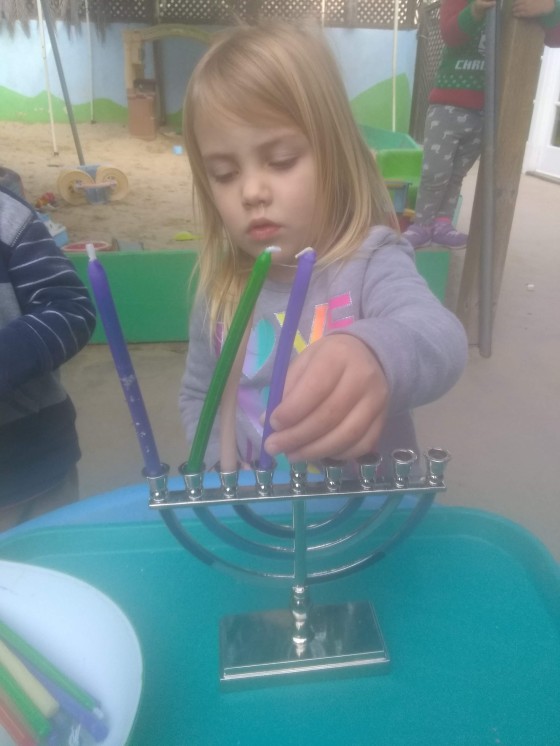 Each candle was color-coded to match a corresponding cavity on the menorah.

By discerning between an array of different colors, students exercised their matching and visual perceptual skills.

This experience also encouraged your little ones to investigate, discover, and learn new ideas related to a culture different from their own. 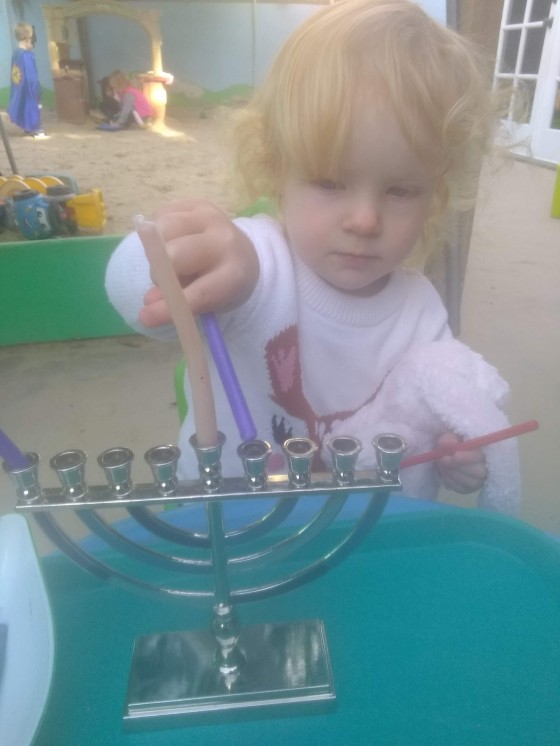 By collaborating with their classmates, they also fostered their decision-making skills, supporting their emerging social-emotional development, as they best problem-solved how to share supplies to meet a common goal.

We have been learning about the many words that begin with the letter D, because our word for the week is Dreidel! We began our week with the words dreidel, dirt, and dinosaur.

To help make this activity fun and memorable, our task was to place dinosaurs inside a large letter D. By doing this, your little one incorporated several developmental domains. They not only accessed their ability to evaluate space (How many blocks will fit?), but were given an opportunity to work with their peers. 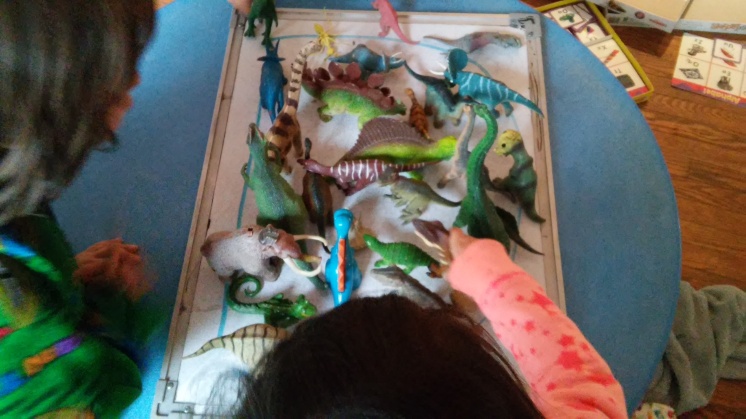 Social development is an essential component to many of our activities. They build self-esteem, create community, and encourage conflict resolution, which is essential as your little ones continue to grow and flourish!

According to tradition as recorded in the Talmud; at the time of rededication, there was very little oil left that had not been defiled by the Greeks. Oil was needed for the menorah in the Temple, which was supposed to burn throughout the night, every night.

There was only enough oil to burn for one day, yet miraculously, it burned for eight days, the time needed to prepare a fresh supply of oil for the menorah.

An eight day festival was declared to commemorate this miracle.  To incorporate this into our week of our Hanukkah festivities, we conducted an oil experiment with oil, water, food coloring, molasses, and honey.

Doing so enabled your little one to acquire new language (words like density, heavy, viscous, cloudy water) as they applied their knowledge of science concepts such as observation, speculation, and implementation. 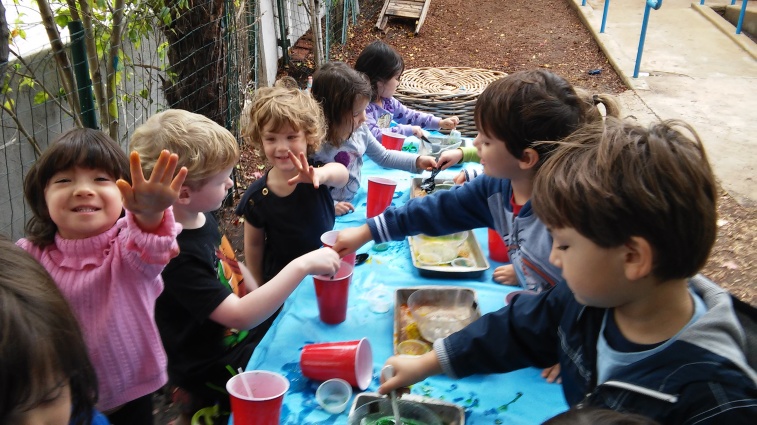 Manipulatives increase strength and coordination in the small hand and finger muscles. For this activity, we added beads to a peg board to create the letter D for dreidel. 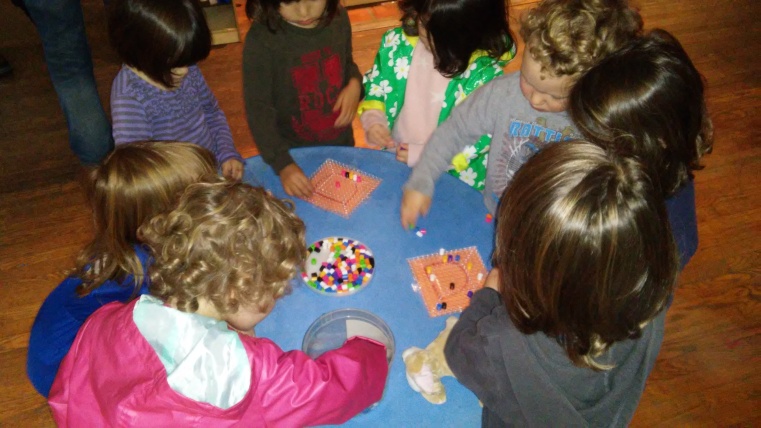 Picking up the bead and manipulating it in your child’s hand until it was pinched between their thumb and forefinger, involved translation, shift and rotation movements of the bead within the hand. This promoted the tripod grasp.

Maneuvering the beads into the shape of a D fostered visual discrimation as your budding writer selected the pattern that fit their mental image of the desired letter. Lastly, this activity was self-correcting, which encouraged creative thinking, problem solving skills, and spatial reasoning.

misscarriescorner
Create a free website or blog at WordPress.com.