We love to learn all about circles at our school. For this activity, students studied the science behind movement.

Out of blocks, we created a ramp and enjoyed observing how different circular objects rolled down it.

Sorting is an essential pre-math skill that many young children enjoy doing.

For this fun activity, we sorted squares and rectangles!

Using their thinking minds, students picked up blocks out of a basket, and placed them in the correct shape!

The origin of the Christmas wreath dates back to the ancient times of the Persian Empire. During that time, wreaths were believed to be a symbol of importance as well as success.

They were much smaller in size than the present ones and were known as ‘diadems’. Only the royal and upper class members of the society used to wear the wreaths as headbands, sometimes along with jewels. 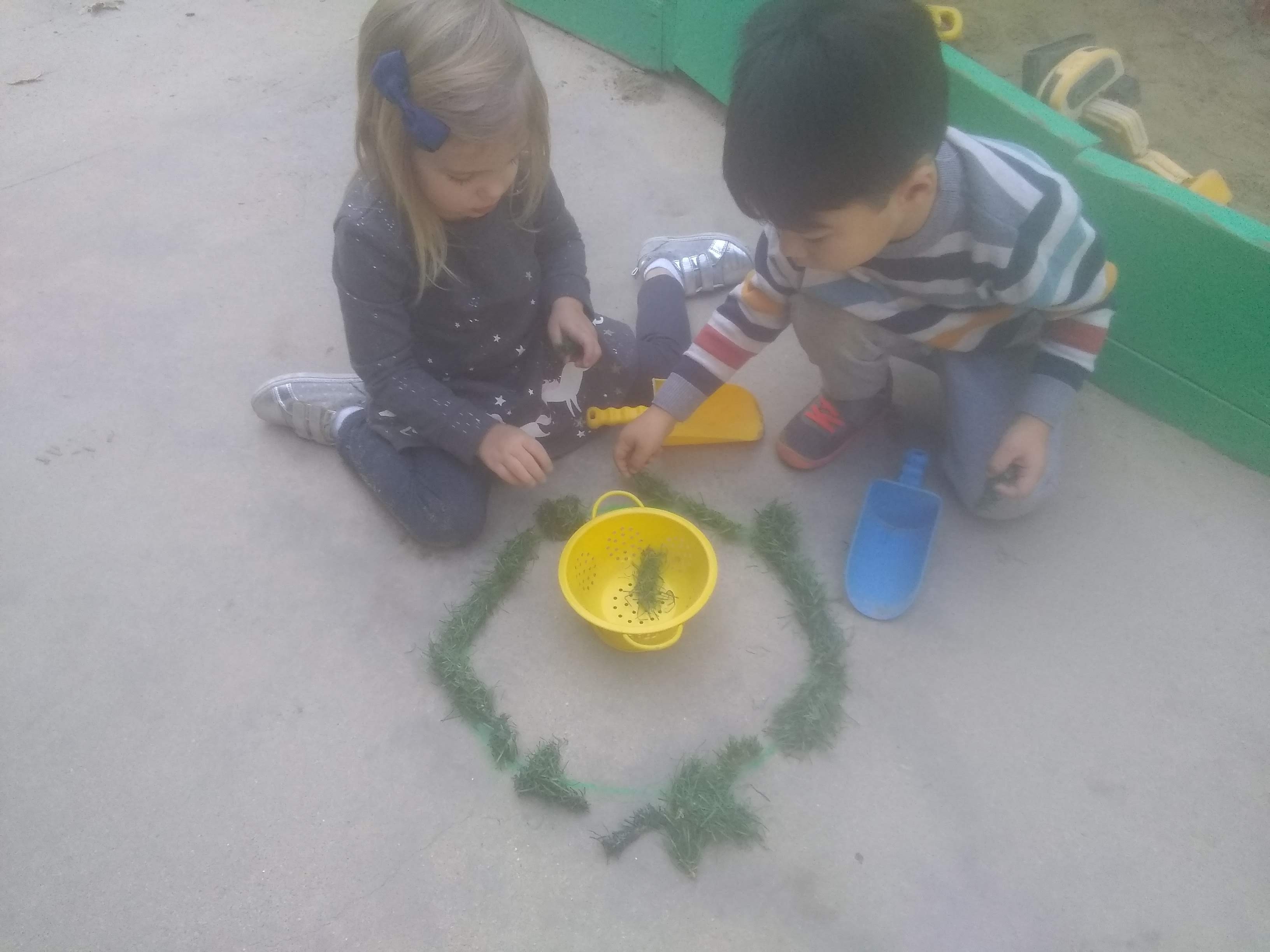 It is believed that other cultures became fascinated with this tradition of wearing wreaths and adopted them into their respective cultures. Somewhere around 776 BC, Greeks started placing wreaths made of laurel on the heads of the athletes who came first in the Olympic Games.

Very soon, important military and political leaders of Roman Empire started wearing wreaths. One popular example from ancient Rome is Julius Caesar, who used to wear wreath on his head, just like the crown of a king.  The transition of the wreaths from a headgear to a wall/door decoration is not known with much accuracy. However, it is believed that once an athlete decided to save the headgear as a souvenir of his/her victory and since then began the tradition of using wreaths as a Christmas door/wall decoration. 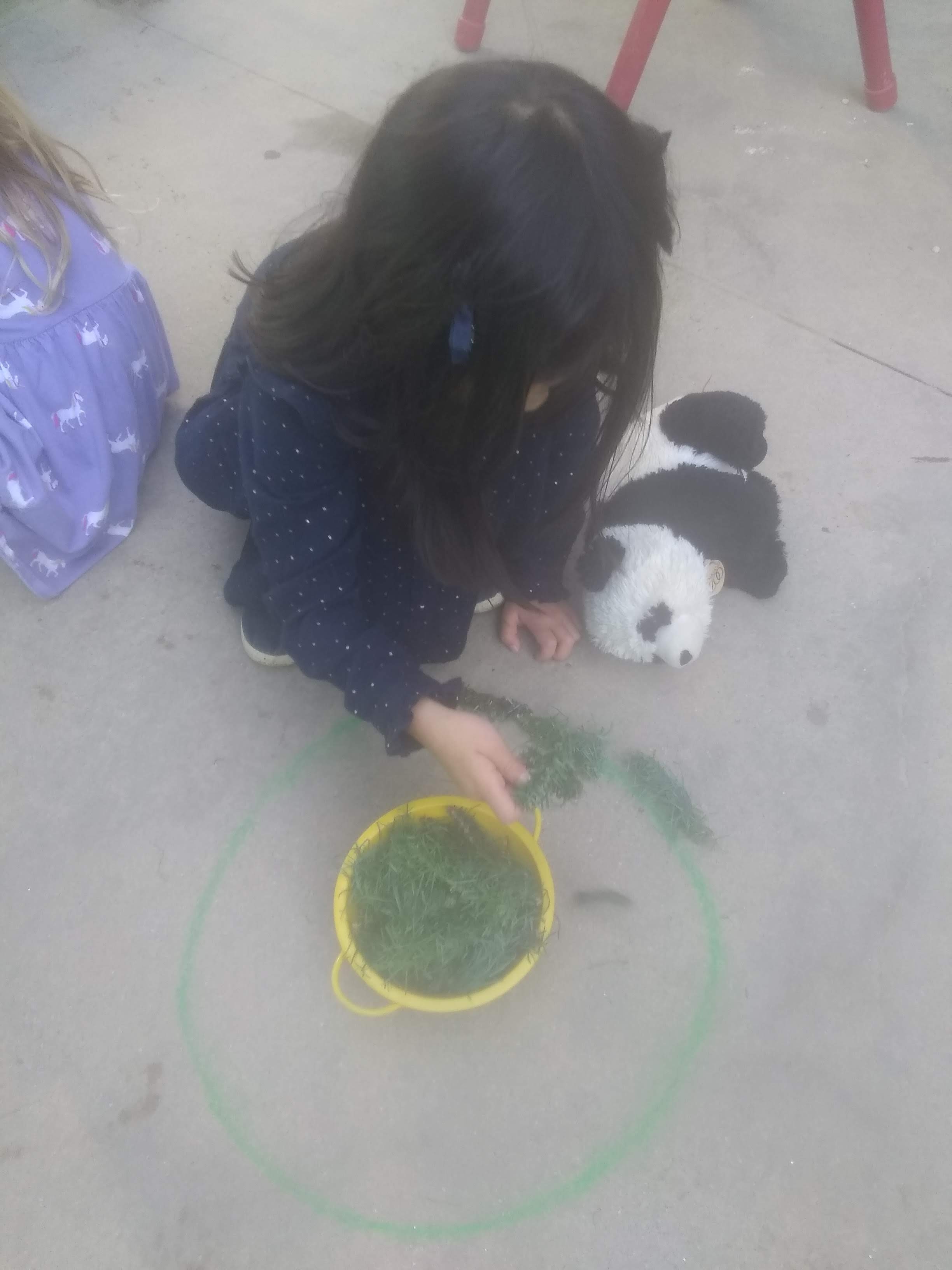 The tradition of using evergreen branches as a material in wreaths is influenced by the Egyptian, Chinese and Hebrew cultures who believed that evergreen branches are a symbol of eternal life. With the passage of time, the custom of Christmas wreath became an important tradition widely followed by people from different parts of the world. 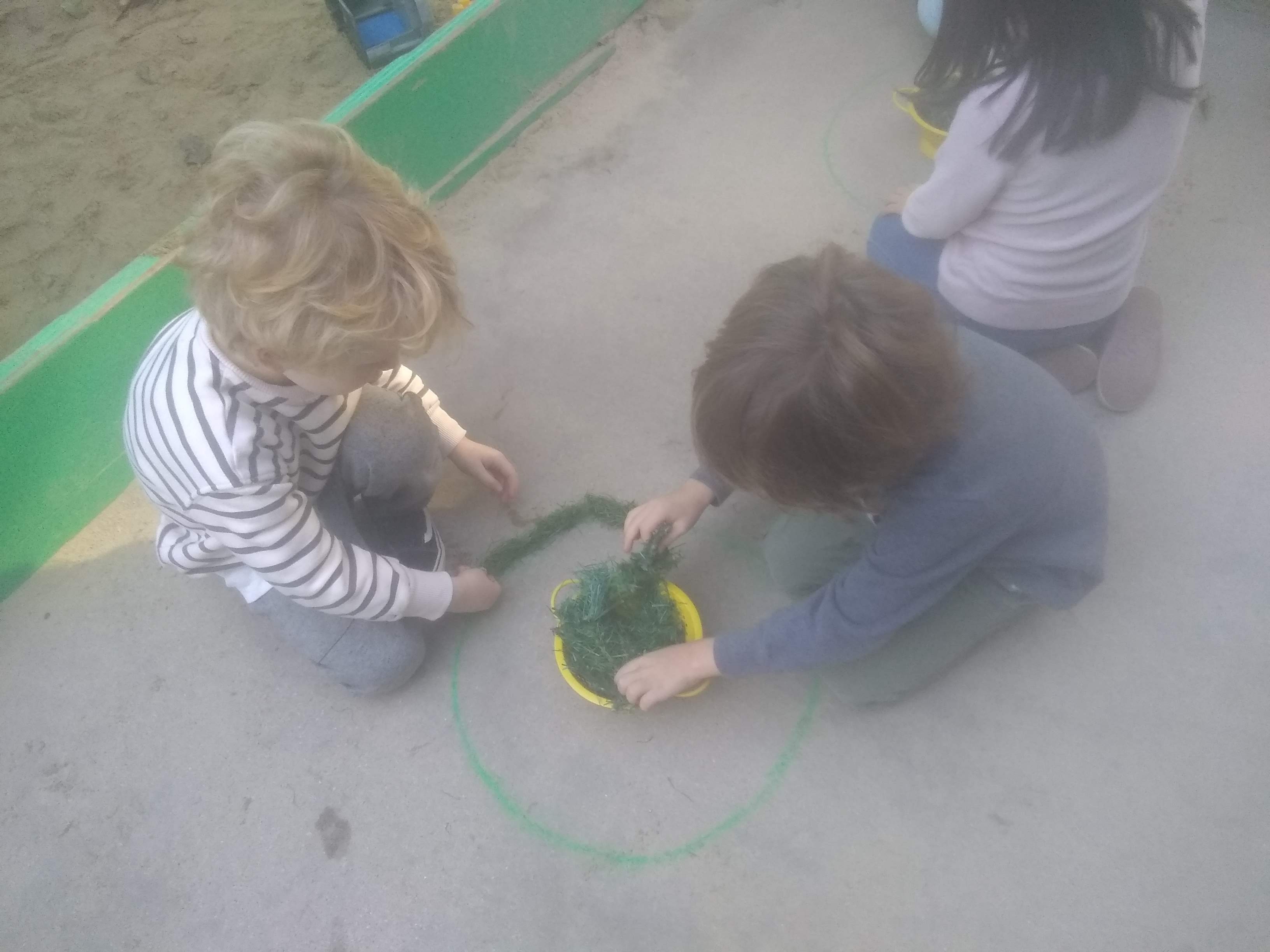 As part of our Christmas week, we enjoyed exploring the different decorations and learning about the history behind them! For this project specifically, students were broken up into groups of two. They were then instructed to trace a circle that was drawn onto the sidewalk with chalk. Lastly, they were instructed to place their wreath segments onto the circle!

Using play dough (or in fact any type of dough) with young children is beneficial in so many ways.

The malleable properties of play dough make it fun for investigation and exploration as well as building up strength in all the tiny hand muscles and tendons, making young writers ready for pencil and scissor control later on.

For this activity, we used play dough, pipe cleaners, and googly eyes to teach your little ones about lions.

Using their hands, they practiced placing their pipe cleaners into the dough to create their lions! 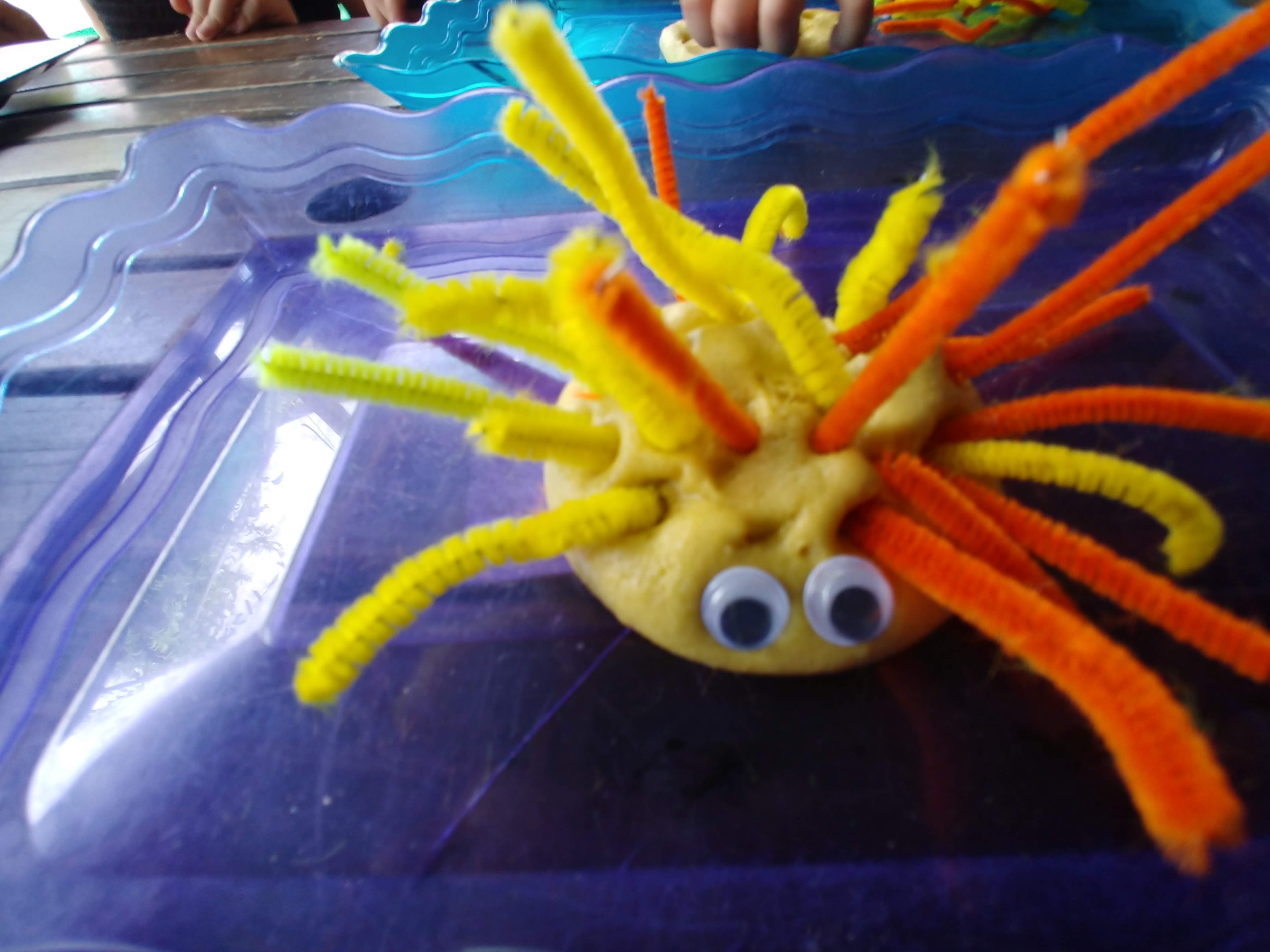 Using paper towels, paint brushes, and watercolors, we explored the exciting science behind giraffe spots! Before doing this project, we talked about spots and the different animals that have them. We then examined a few toy giraffes and discussed the different colors we saw. Lastly, we conducted an experiment! Using paint brushes, we dropped watercolors onto paper towels.

As the towel became saturated, the spots started to run together! Sensory and discovery activities offer a means to introduce scientific concepts to young children.

As they engage in the activity, they are practicing what they are learning. The actions they take part in allow them to experience a concept. 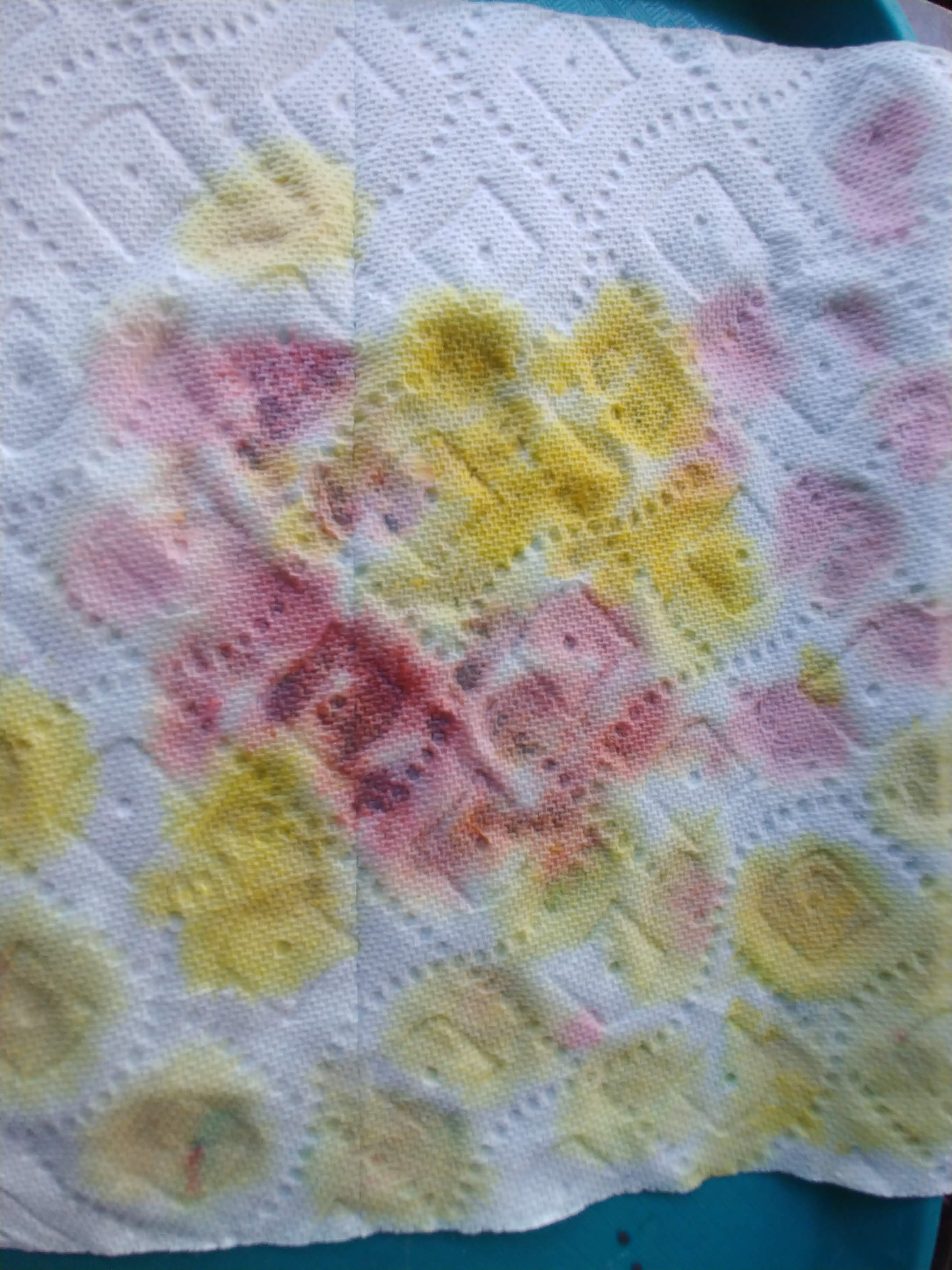 As we were doing this activity, your little one was encouraged to talk about what they saw and what they were doing. 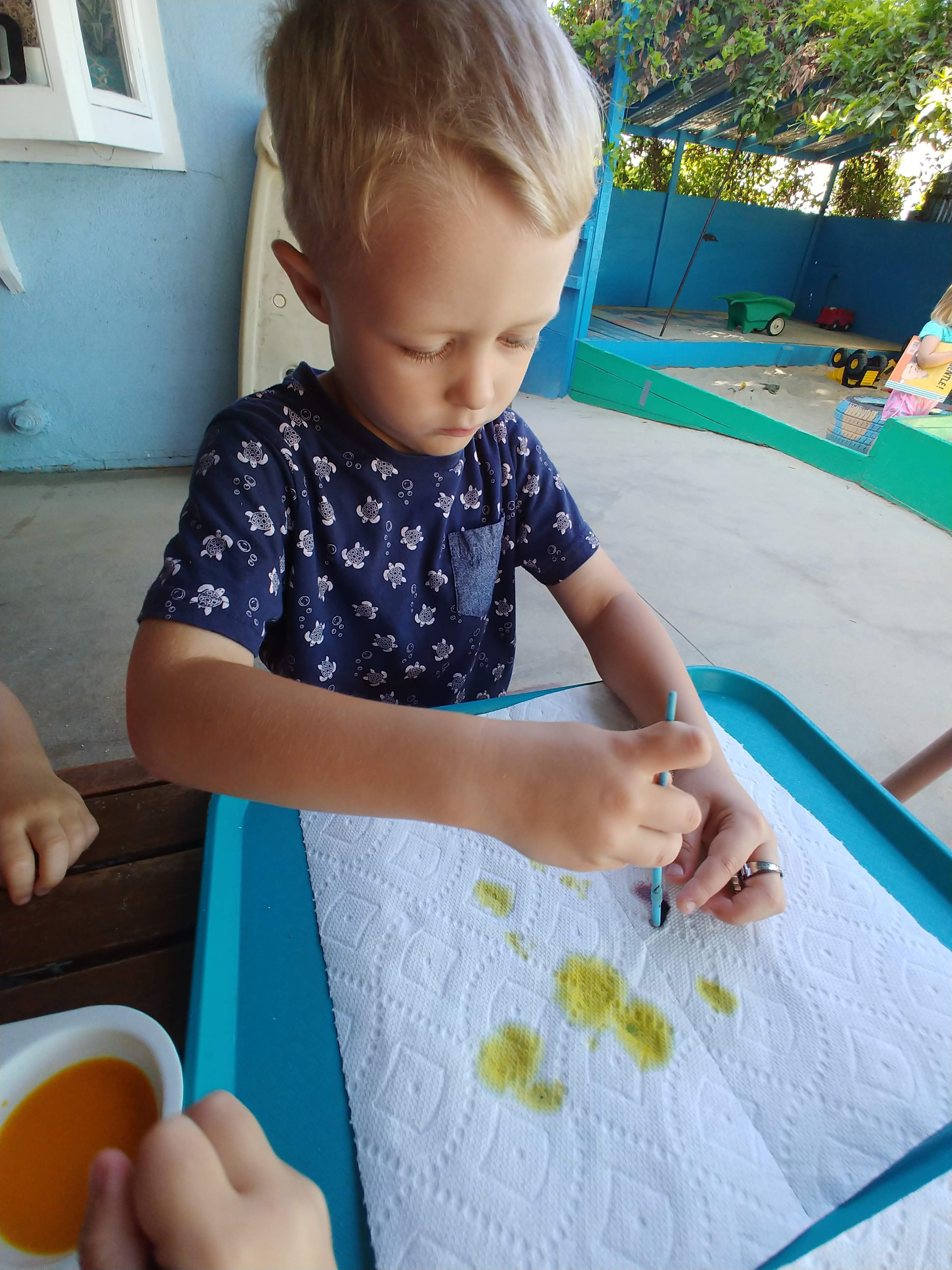 Doing this enables their understanding of the physical and mental processes they are experiencing and provides them with the vocabulary to describe it. 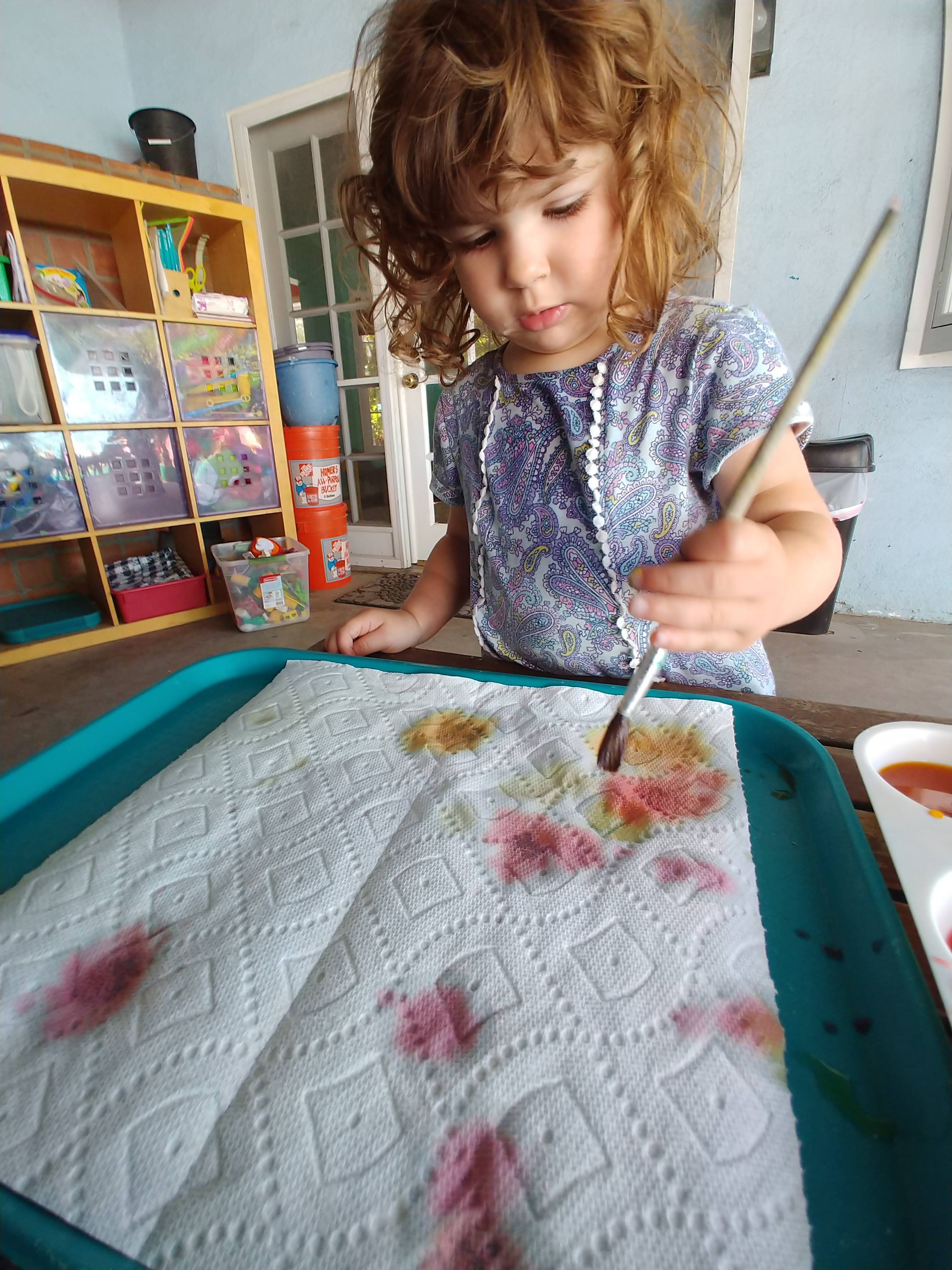 One thing we like to do in Miss Carrie’s class is create environments.

We do this with a variety of materials to make these activities fun and stimulating.

For this activity, we created savannahs out of play dough and yellow pipe cleaners. 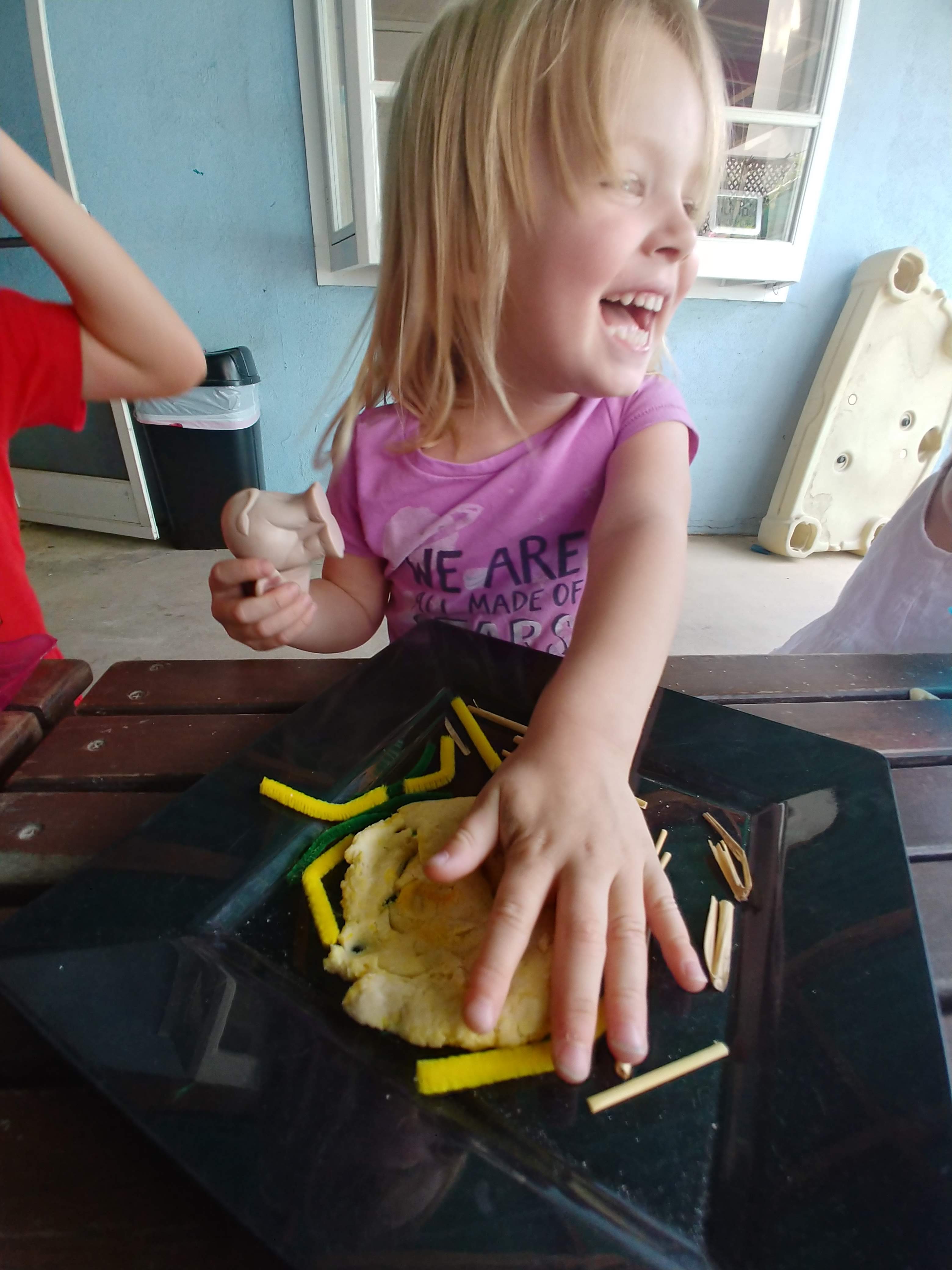 Students then added an animal to their savannahs and created different scenarios with their friends!

Dark, cold and whipped by supersonic winds, ice giant Neptune is the eighth and most distant planet in our solar system.

More than 30 times as far from the Sun as Earth, Neptune is the only planet in our solar system not visible to the naked eye. Neptune’s atmosphere is made from about 80 percent hydrogen and 19 percent helium.

It also contains a small amount water and methane, which give rise to the green-bluish color. The dark blue and bright white features of the atmosphere help distinguish Neptune from Uranus.

The thin cirrus-like white clouds contain methane ice. When hydrocarbon snowflakes form in Neptune’s atmosphere they melt before reaching the surface because of the high pressure. The fastest winds in the Solar System blow on Neptune.

With speeds of about 1,240 mph, they are five times faster than the strongest winds on Earth! To help your little ones understand the vast gases of Neptune, we created our very own!

Using baking soda and lotion as our play dough, we constructed spheres that resembled the planet. We then used eye droppers to add vinegar to the dough, laughing as we watched. 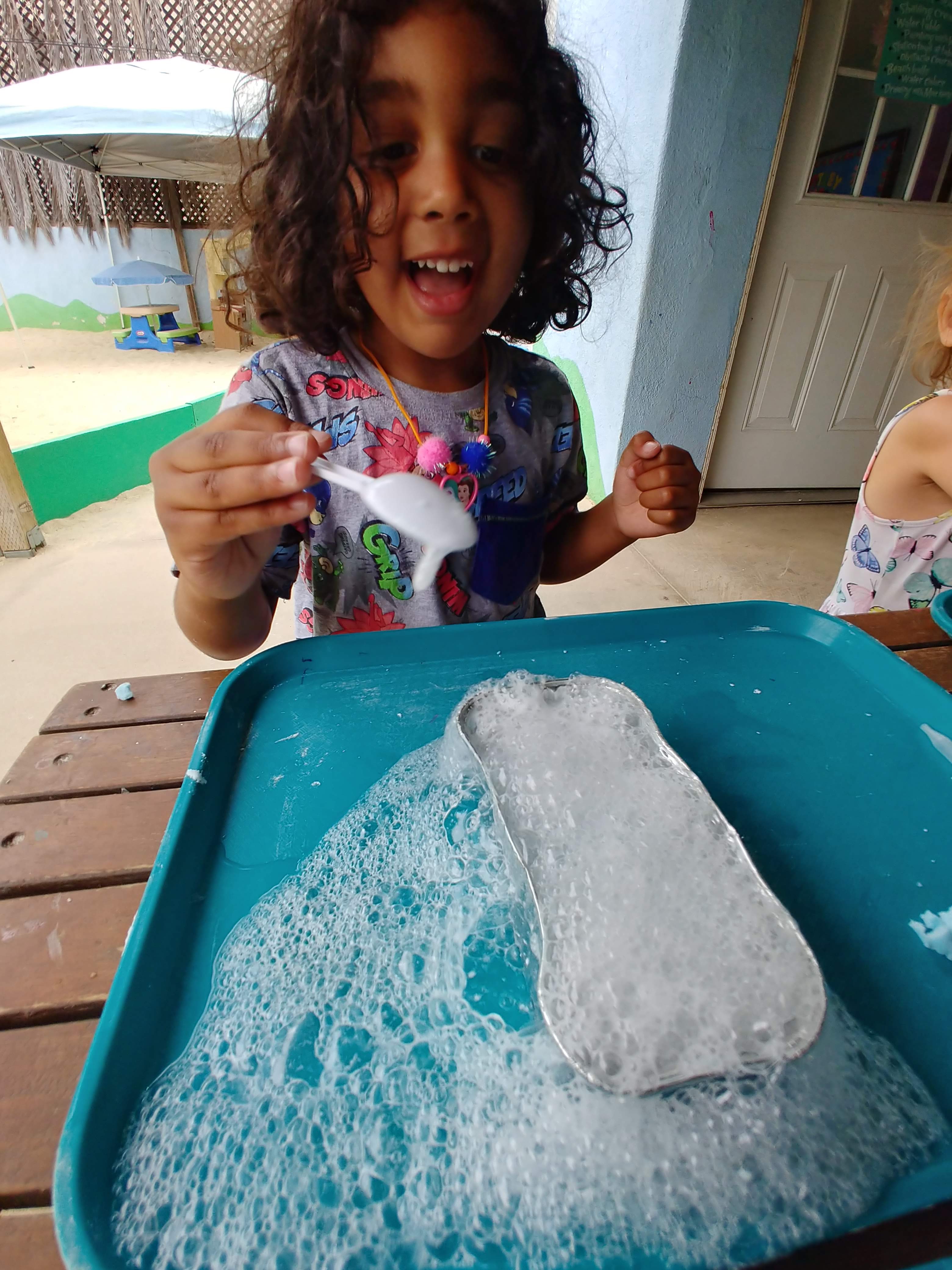 For young children, the magic of learning occurs in the relationship between cause and effect. Some of the best preschool activities are science related. This occurs because preschool children are inquisitive and open-minded, perfect traits for budding young scientists!

This is a lot of fun for them because young children are truly mesmerized by chemical reactions, love exploring nature, and jump to build things. During our week of rockets, we learned all about rocket fuel. 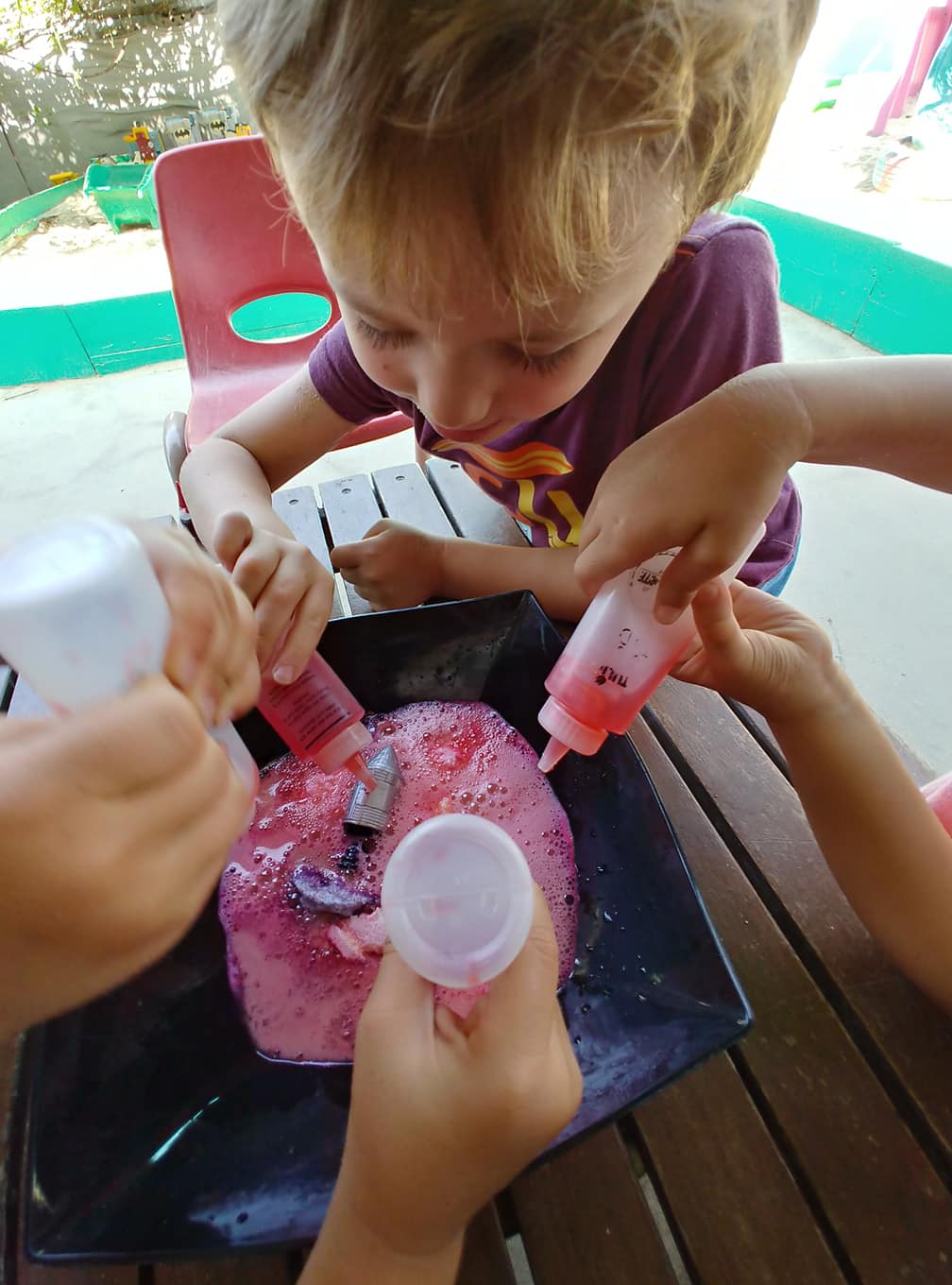 We talked about how rockets are able to be lifted and how this happens because of planned explosions that occur within the engine.

To demonstrate this, we created chemical reactions out of bath bombs. We first placed a rocket inside a bowl and surrounded it with the crystals of the “bombs.” We then added water and watched as the material fizzled and sizzled before our very eyes! In some cases, the reaction was so strong that it knocked the rocket over!

Children learn through experiences, and the earlier they are exposed to STEM-based hands-on learning experiences, the better.

Engineering activities, by their nature, are an inquiry-based pedagogical strategy that promotes learning across disciplines.  Engineering curricula introduces students of all ages to everyday applications of science, mathematics, technology and engineering that match their values and view of the world. 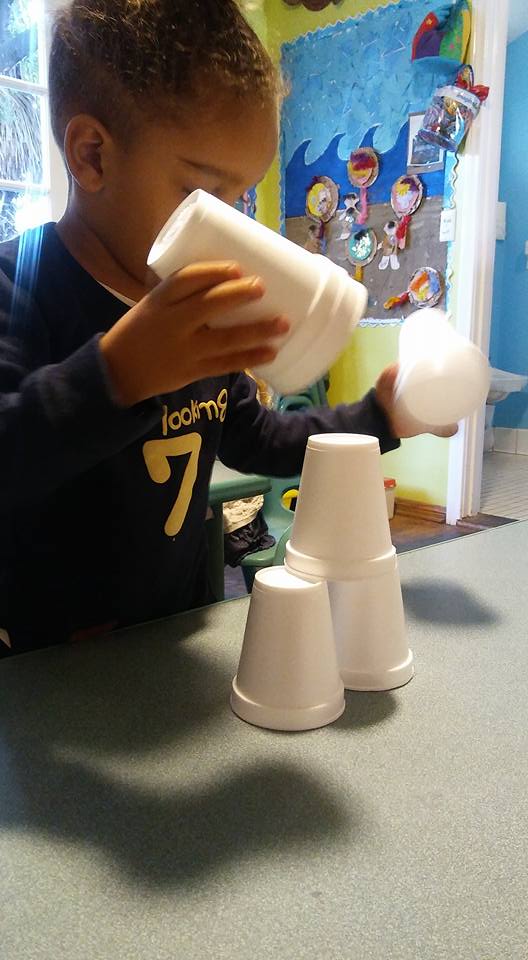 This, and many of our other activities are designed to engage students in hands-on STEM experiences in order to improve their understanding of fundamental concepts in a way that capitalizes upon their design, visualization, creativity and teamwork skills and yearnings. 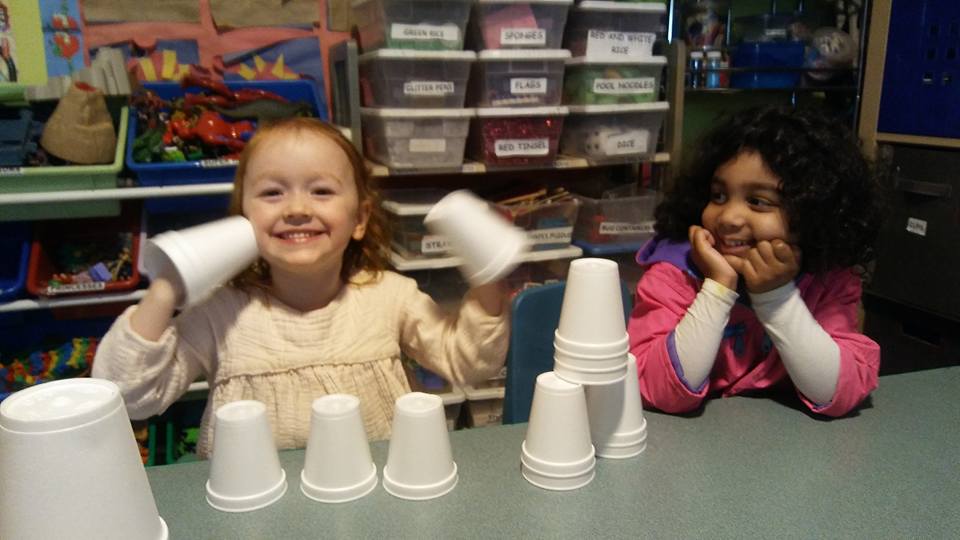 For this STEM activity, students created white structures out of cups. These structures symbolized glaciers and other snow-topped bodies of land that surround polar bears. Using their hands, they stacked the cups in various formations and then stuck their bears into the middle. It was so much fun seeing what everyone came up with! 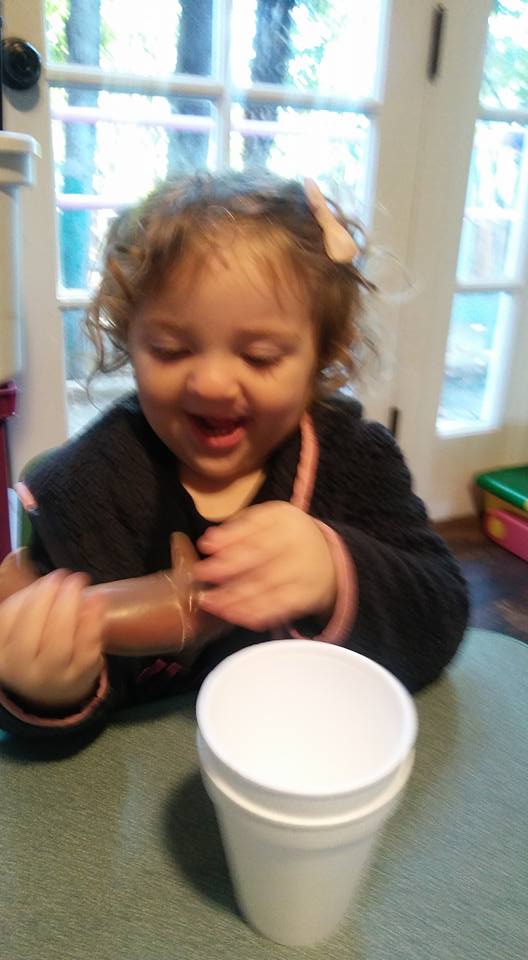 A polar bear’s fur is made up of two layers – an outer layer, with long ‘guard’ hairs, and a thick undercoat, with shorter hair. The outer layer of hair is clear – and a polar bear’s skin is black.  Polar bears evolved to have black skin, as the color is the best for absorbing energy from the sun. 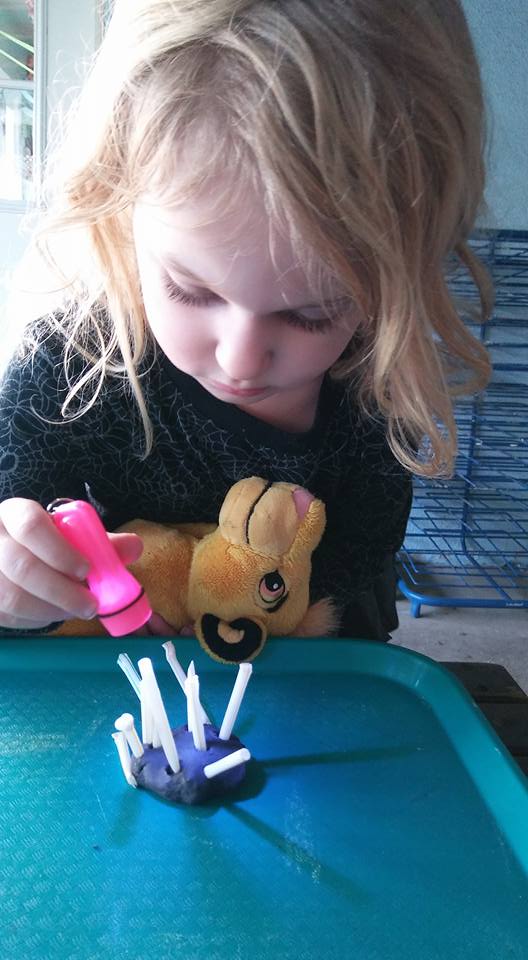 This is because objects that appear black don’t reflect any light – and as polar bears are found in countries around the Arctic Circle – Canada, Russia, Alaska in the US, Greenland and Norway – the colder conditions require as much sunlight as possible to be absorbed when it’s available.

The clear fur allows this sunlight to get to the skin – but it still looks white, so that the bear can blend in with its environment of ice and snow. To learn about this phenomena, we conducted a science experiment with black play dough, straws, and flashlights. Using their fingers, students manipulated black play dough with straws. They then shined their flashlights directly onto the straws. Doing so enabled them to see that even though the play dough was black, the light against it made it look white!