Calligraphy, or the art of writing, was the visual art form prized above all others in traditional China. The genres of painting and calligraphy emerged simultaneously, sharing identical tools—namely, brush and ink. 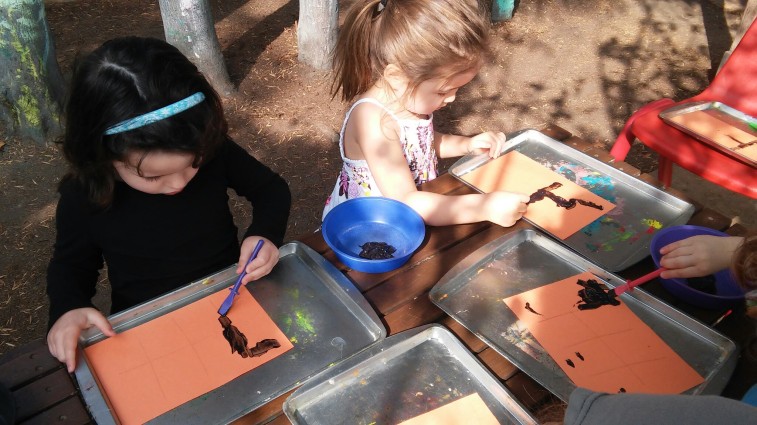 Calligraphy was revered as a fine art long before painting; indeed, it was not until the Song dynasty, when painting became closely allied with calligraphy in aim, form, and technique, that painting shed its status as mere craft and joined the higher ranks of the fine arts. 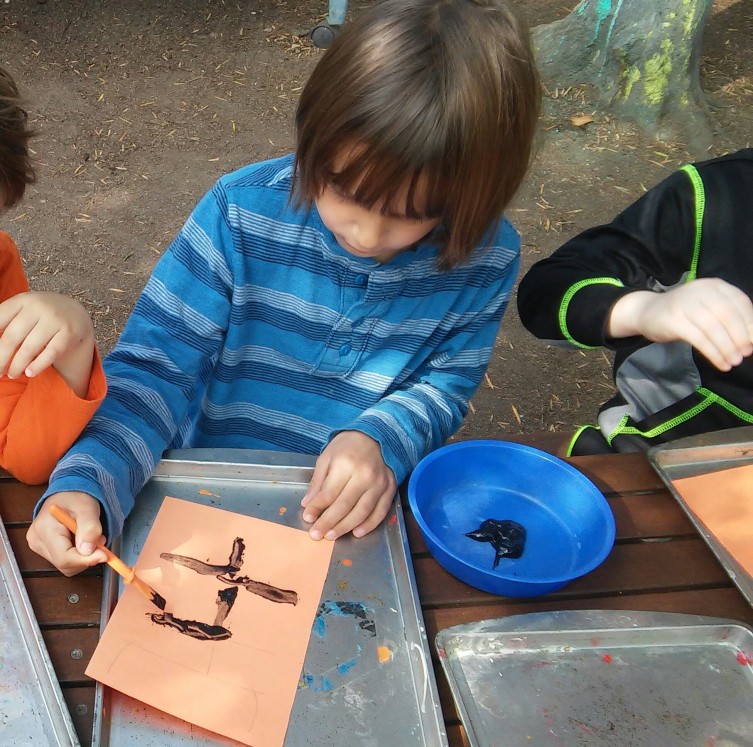 For this activity, we used paint scrapers and black paint to create the Chinese symbols for the animals of the Zodiac. 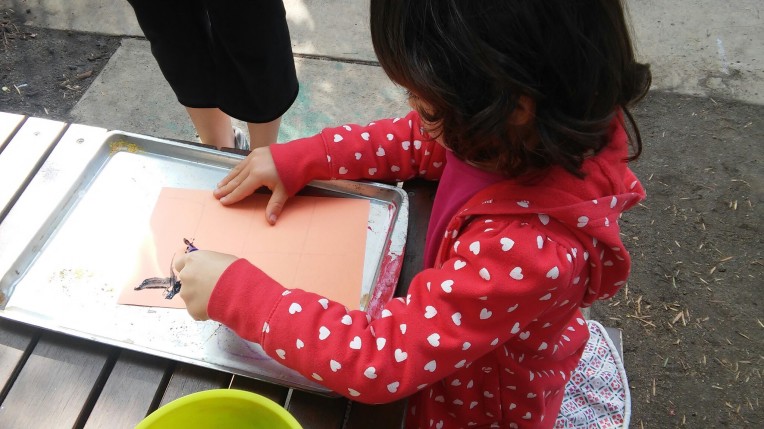 The rattle-drum is one of the oldest and most traditional toys in China. It is a small double-sided drum with a handle and a wooden ball hanging from a string attached to each end of the edge to beat the drum. When swayed, the balls on both sides will beat the drum, sending out rattling sounds. The earliest form of the rattle-drum appeared in the Warring States Period, when it was used as a percussion instrument. In the Song Dynasty, the rattle-drum found its way in rites, music and business activities. It also became a toy for children, enjoying huge popularity, thanks mainly to its sound effect and recreational function.

For this activity, we painted red paper plates and attached beads to them to create the rattle drum. During circle time, we pretended to be peddlers crying their wares, shouting in cadenced voices to attract buyers. In China, the rhythmic sounds of a rattle-drum are easy to draw attention. This drum is not only practical to Chinese peddlers, but is invariably recreational and creates a happy, relaxed and fun atmosphere when it is shaken to drum up.

Most of us instinctually know that art is important for children; we simply believe it’s important because we’ve seen our children deeply involved in art. But beyond what we feel and believe, there is much factual information about why art is important in our children’s development that is both interesting and helpful to know. Creating art expands a child’s ability to interact with the world around them, and provides a new set of skills for self-expression and communication. Not only does art help to develop the right side of the brain, it also cultivates important skills that benefit a child’s development. But art goes far beyond the tangible statistics measured by studies — it can become a pivotal mode of uninhibited self-expression and amazement for a child. Art matters the same way language matters — or the way breathing matters! It is a fundamental component of what makes us uniquely human. 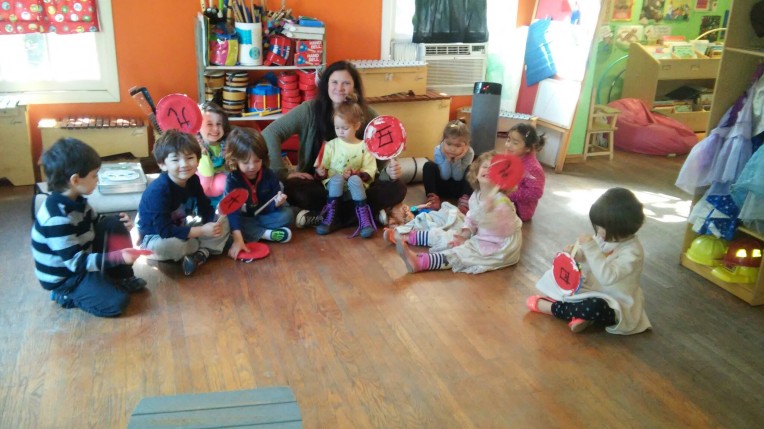 The origin of fortune cookies is a mystery. While their Japanese origins aren’t disputed, nobody knows exactly where the modern fortune cookie came from. It’s widely reported that they made their first American appearance at San Francisco’s Japanese Tea Garden in the 1890s, however, nobody knows who invented them specifically. 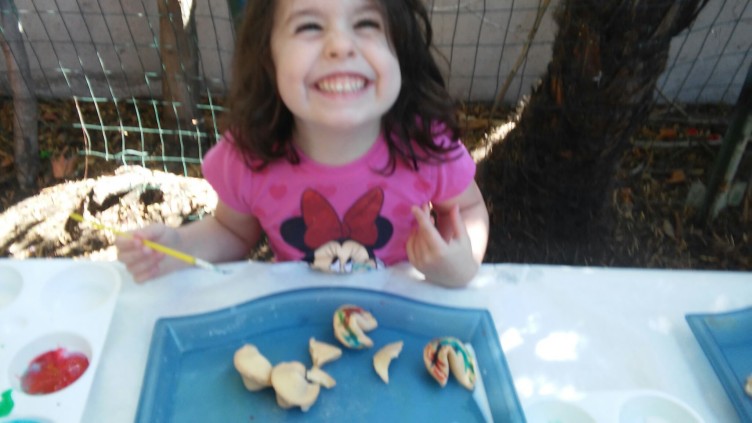 Several people have claimed to be the sole inventor of the fortune cookie, including the founder of Los Angeles’ Hong Kong Noodle Company, David Jung, who claimed that he invented them in 1918, and Seiichi Koto, a Los Angeles restaurant owner who claimed that he got the idea to insert fortunes into cookies from slips that are sold at temples in Japan, and sold them to restaurants in the city.

In fact, they’re based on a Japanese recipe. In several regions of Japan, a cookie called sujiura senbei is sold on the new year for good luck, and these are widely believed to be the origin of the modern fortune cookie. The fortunes are actually baked into the cookies, however, and they’re larger and use a different recipe. Fortune cookies didn’t make their way to China until 1989, and they were sold as “genuine American fortune cookies”.

On their path towards discovery, young children need to use all of their senses. We include food in many of our activities because children learn best by exploring, feeling, tasting, smelling, and even playing with materials. These play experiences teach them not only about food but give them tangible experiences to then build on for future discussion. 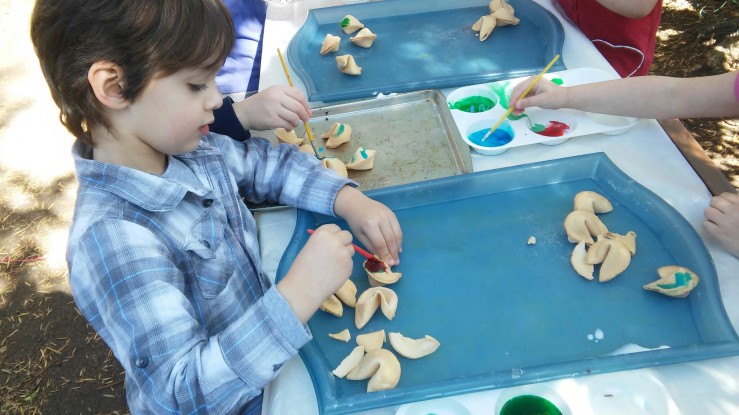 Our week was filled with a host of sensory items!

To incorporate the colors of the Chinese Lunar New Year (and the good fortune that they symbolize), we used several different materials to recreate the flag for our young ones, and combined Playdoh, glitter, jewels, and other moldable materials to create opportunities for dialogue, new vocabulary, and learning!

Young children learn and process new information by using their sense of touch, and are more engaged if they can “feel” and manipulate a variety of materials. This not only fosters creativity; it enhances cause and effect, provides opportunities for problem solving, and most importantly, teaches children the physical properties of different materials.

By manipulating several kinds of materials they see how materials mix, and how they are affected by different combinations. Sensory play is one of the most engaging activities that your little ones partake in, and is a constant delight as it provides a significant amount of learning and fun.

Tangrams are a popular form of puzzle in China, so we spent about fifteen minutes putting together pictures of flowers, butterflies, boats and houses, using colorful wooden shapes.

Puzzles help promote cognitive development, and by manipulating the colorful tiles, our little ones not only had fun, but were able to understand concepts related to shape and color as formed their own theories about them.

A mental operation, according to Jean Piaget (a noted psychologist) is the ability to accurately imagine the consequences of something happening without it actually needing to happen. 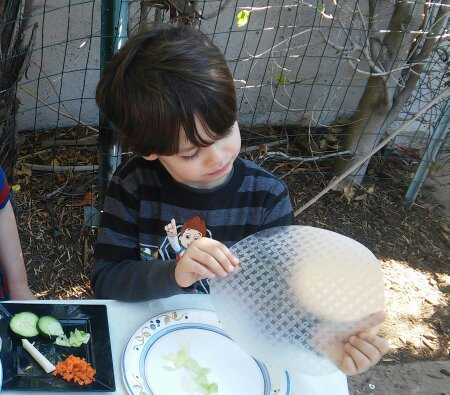 During a mental operation, children imagine “what if” scenarios which involve the imaginal transformation of mental representations of things they have experienced in the world; people, places and things. 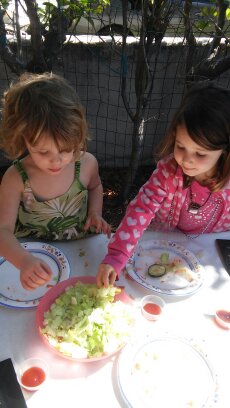 At four years old, children must experience new information with their senses in a three-dimensional setting. 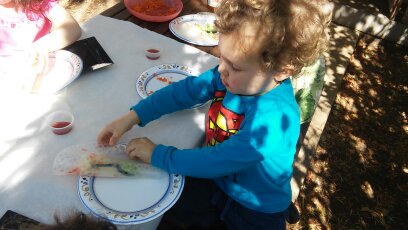 They cannot simply see a picture of an item to fully integrate its existence, they must see it, feel it and touch it.

This is why we are constantly “doing” our projects rather than just reading a book about a particular subject.

For this activity, we made spring rolls to help celebrate the Chinese New Year!

In Chinese culture, spring rolls are a savoury treat, created with cabbage, rice paper, and other vegetable fillings.

They are usually eaten during the Spring Festival (Chinese New Year), hence their name.

You can’t miss these glittery, shiny coins during the Chinese New Year season! These coins (placed into red envelopes) are supposed to signify prosperity and good luck. Your little ones were drawn to these coins straightaway! Besides being a great chocolate treat, these coins can be used for learning in great ways!

For this activity, your little ones Teach were taught how to count by using one to one correspondence according to the numbered envelopes shown! Students identified the numeral and counted the matching amount of coins that they slipped into the envelope. Young children’s development of mathematics knowledge and skills is receiving increasing attention in research and practice.

The mathematics foundations (or developmental domains) cover the following five strands: number sense, classification and patterning, measurement, geometry, and mathematical reasoning. We are constantly exercising these skills in the many activities we do throughout the week!

For this activity, we combined bamboo, rocks, and dirt to learn about panda bears!

By using these materials, we created habitats for our little creatures and learned a new word: omnivore! 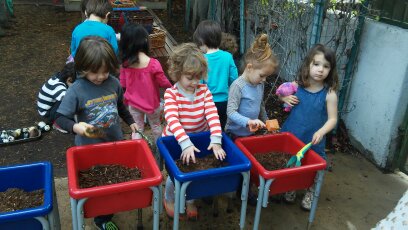 Physiologically, giant pandas are carnivores — they are made to eat meat — but they prefer a vegetarian diet. 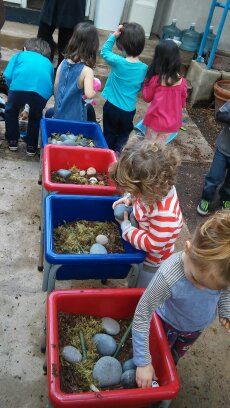 Herbivores are, by definition, anatomically suited to a plant-based diet.

The giant panda is no herbivore. He’s essentially a vegetarian, a carnivore that eats little meat. 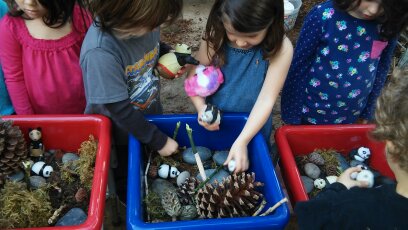 Throughout the activity, your little explorers delighted in manipulating the materials, and providing the perfect home for their little panda bear.

Group projects (such this one) can help preschoolers develop a host of skills that are increasingly important in their budding development. 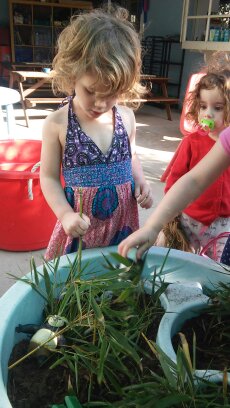 Properly structured, group projects can reinforce skills that are relevant to both group and individual work, including the ability to break complex tasks into parts and steps, refine understanding through discussion and explanation, and develop stronger communication skills.

The Chinese have been wielding chopsticks since at least 1200 B.C., and by A.D. 500 the slender batons had swept the Asian continent from Vietnam to Japan. From their humble beginnings as cooking utensils to paper-wrapped bamboo sets at the sushi counter, there’s more to chopsticks than meets the eye.

The fabled ruins of Yin, in Henan province, provided not only the earliest examples of Chinese writing but also the first known chopsticks—bronze sets found in tombs at the site. Capable of reaching deep into boiling pots of water or oil, early chopsticks were used mainly for cooking. It wasn’t until A.D. 400 that people began eating with the utensils. 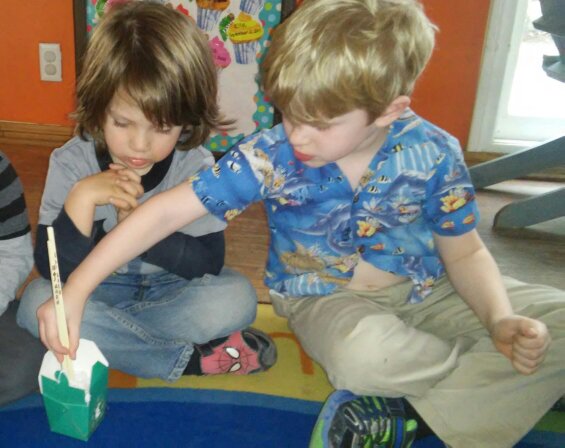 This happened when a population boom across China sapped resources and forced cooks to develop cost-saving habits. They began chopping food into smaller pieces that required less cooking fuel—and happened to be perfect for the tweezers-like grip of chopsticks. To help hone our fine motor skills, we practiced using chop sticks to grasp yarn “noodles” out of Chinese food containers! 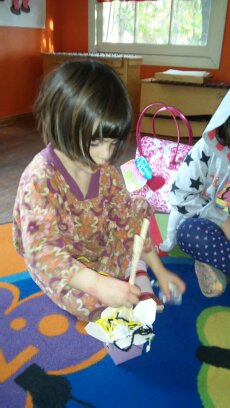