Mariachi music is one of the few styles of indigenous music that serves both a utilitarian and an entertainment function.

The mariachi band is used for many different occasions, such as dances, weddings, and funerals.

It is not unusual to find the group serenading a young woman on the occasion of her birthday, celebrating a saint’s day, or singing to the mother of one of the band members on her birthday.

People who enjoy mariachi music like it because it rekindles old memories, takes them to places that are far away, or brings back scenes of childhood. 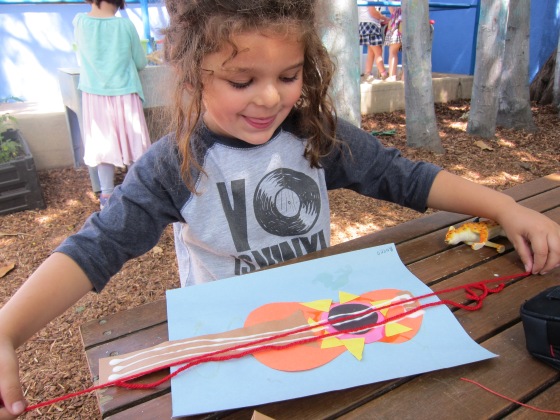 To help your little one understand the connection between Mexico and mariachi music, we both listened to and created our very own mariachi vihuelas!

Maracas, also known as rhumba shakers, are a type of handheld instrument that are usually found in pairs.

In shape they resemble a pair of rattles, with an oval-shaped head and a slender handle. They belong to the percussion family, a category of instruments that means “the hitting of one body against another.” 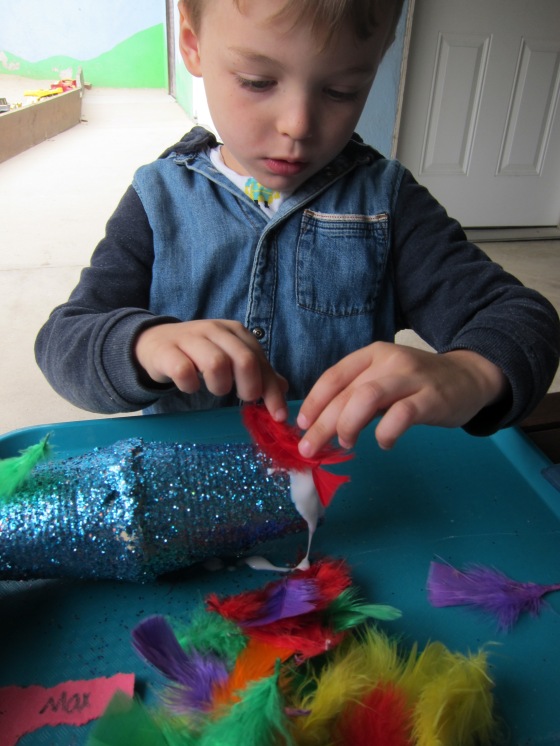 Similar instruments found in this family include the conga, bongo, and timbale. Because maracas are musical instruments that are sealed and create a full, distinctive tone, they are also classified as idiophones.

For this art activity, we created our own version of the maraca using two cups taped (and glued) together, glitter, feathers, paint, and paint brushes. Students first painted their cups. They added glitter, glue, and feathers.

Following that, we put Mod Podge glue to act as an adhesive so that the glitter would stay on. Lastly, we played a song with our maracas called Cinco De Mayo, with a CD accompaniment. 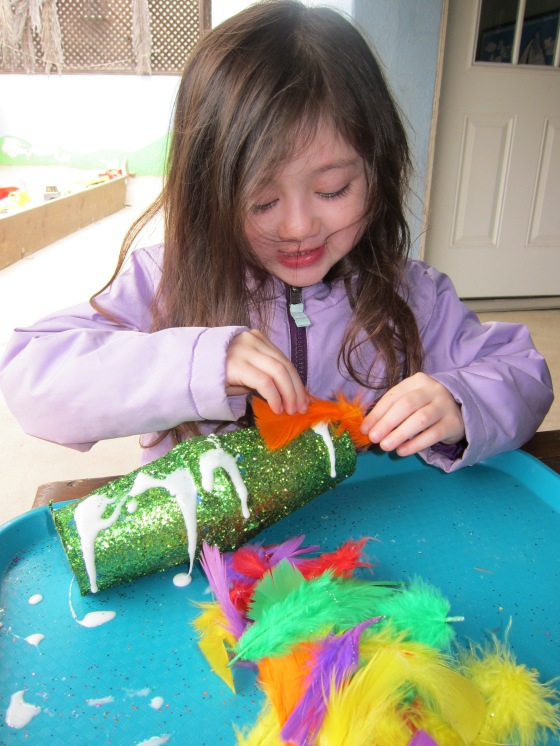 Young children seem drawn to music, and from an early age, they will begin dancing when they hear it. While the physical benefits of dance are well-known, dance also brings social and emotional benefits, according to the National Dance Education Organization. 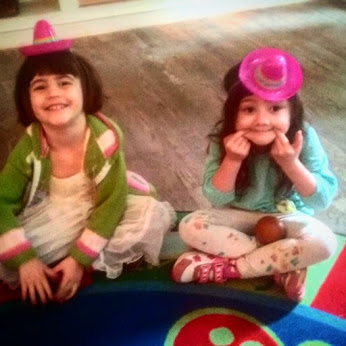 Preschool children will learn social skills such as cooperation and peer interaction as well as building self-esteem when they are involved in dance experiences. 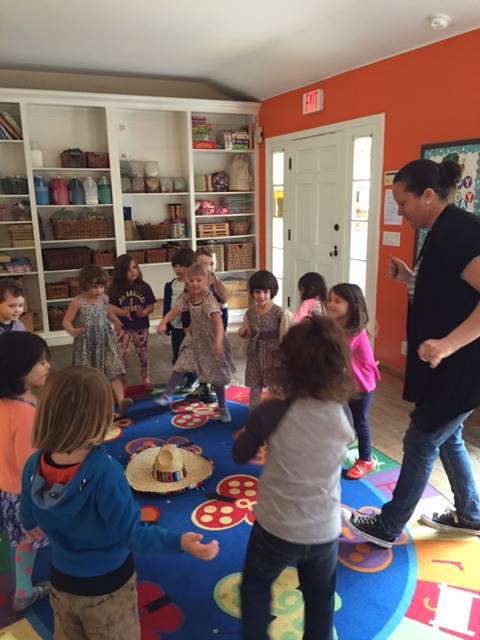 Often children dance before they are able to talk. Dance can become a way for young children to express their emotions in a way they might not be able to verbally.

When children are involved in learning dances, they are learning that their movements can tell a story and communicate ideas.

As the NDEO states, “To the young child, verbal language and movement are entwined.” For this activity, we talked and danced the Mexican Hat Dance. We first listened to the song, and used shakers to play the accompaniment, and then we learned the actual steps to the dance!

When the Aztec people finally found a place to settle down, they did so on rather marshy land around a lake. Some of the land was not very good for gardening. As the population grew, the Aztecs needed to find a way to grow more food. They could have built further away from the cities, but then they would need to guard the fields from robbers. 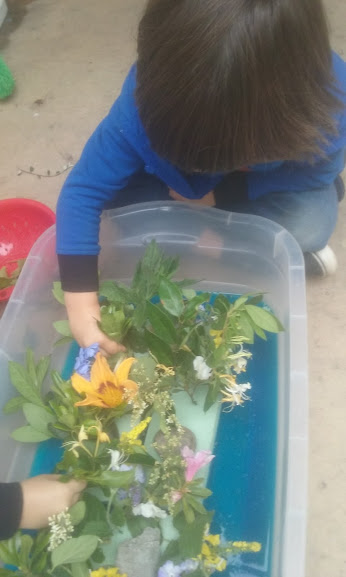 Instead, the clever Aztec engineers created “floating” gardens. The floating gardens were actually rafts. The rafts were anchored to the bottom of the lake, or to a strong tree in the marsh. They piled vegetation and reeds on top of the raft to help provide good soil and drainage. On top of this, they piled dirt. They planted seeds in the dirt. The gardens were used to grow chili peppers, corn, tomatoes, beans, and squash. 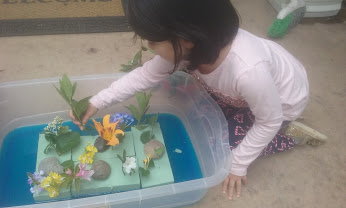 It was somewhat difficult to harvest the food since the gardens were floating in marsh water. To solve this, Aztec engineers built mud and stone walls around each floating garden. The walls acted as walkways between the gardens. 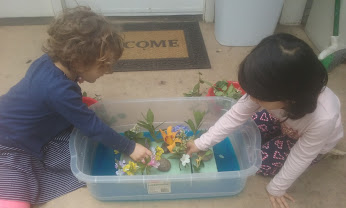 The floating gardens solved some of their problem, but as their population grew, they needed more land. Their engineers solved this by designing dikes to hold back water. They filled in the marshlands and swamps just as they had the rafts, the floating gardens. 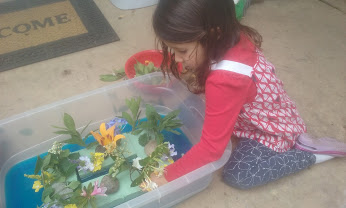 To understand the engineering behind these floating gardens, we created our very own! Instead of rafts, we used flower foam. Students used this foam as a base to “pluck” their vegetation into. Using real plants and flowers, they created their very own floating gardens!

The Pyramid of Kukulcan (also know as El Castillo, a name given by the Spanish Conquistadors) is the central pyramid of Chich’en Itza, it was built over a pre-existing temple between 800 and 900 AD. 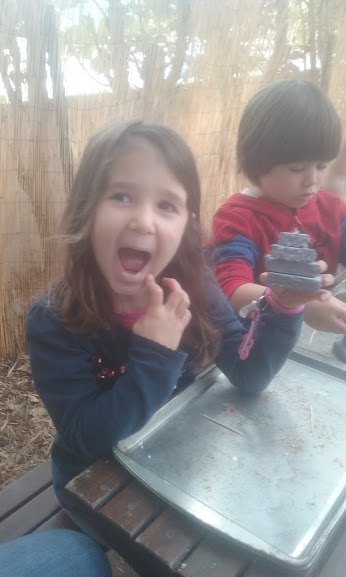 It is the biggest pyramid in Chich’en Itza; at its base 53.3 meters wide on all four sides. It towers above the other monuments at 24 meters tall with a 6 meter temple on top of the highest platform.

Before access to the throne room of the pyramid was restricted, you could climb to the top and, on a clear day, see the top of the grand pyramid at the nearby ruin site of Ek Balam.

The Mesoamerican fascination with, and knowledge of, math and astronomy shines when examining the details of its architecture. Each of the four sides has ninety-one steps ascending it, 364 steps total, with the temple topping the pyramid considered an addition step totaling 365, each step representing a day in the calendar.

Additionally, the pyramid’s nine stages, bisected by a staircase on each side, represent the eighteen months of the Mayan Calendar year.

The pyramid was built to be a physical representation of the Mayan Calendar (the same calendar that predicted the end of the world in 2012), while its orientation, slightly North East, is believed to have been calculated in order to create the phenomenon know as the “Descent of Kukulcan”.

For this activity, we once again used specially-made blocks to build the pyramid. Students learned a little bit about the history (including the Mayans) and then worked in small groups to recreate this magnificent piece of history! 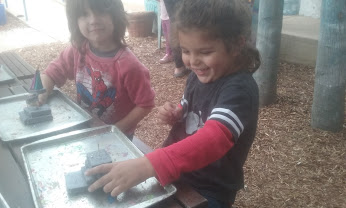 Teotihuacan, the most important city of pre-Aztec central Mexico, was, at one time, one of the largest cities in the world. 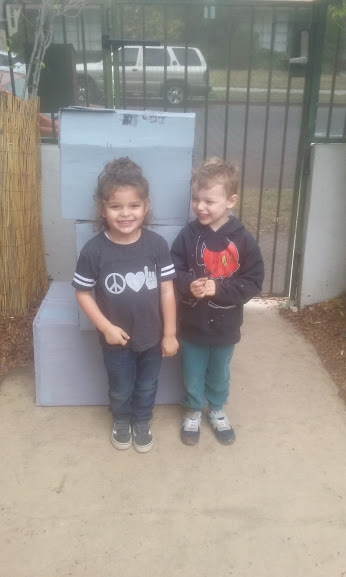 It was the region’s major economic as well as religious center.

At its apogee, it supported a population of 200,000 people, and encompassed some eight square miles. 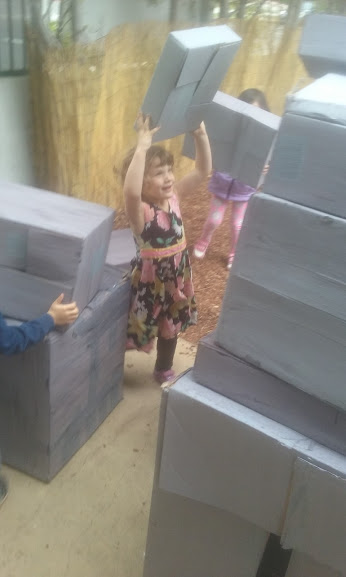 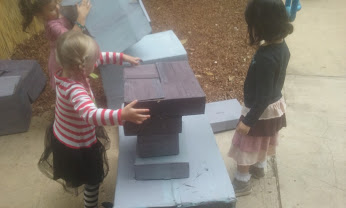 The Pyramid of the Moon was located at the end of a street called the Street of the Dead.

As morbid as it sounds, this impressive structure mimics the contours of the mountain Cerro Gordo, just north of the site.

To help your little one understand the beauty of this magnificent structure, we created the Pyramid of the Moon with boxes in small groups of three to five kids. 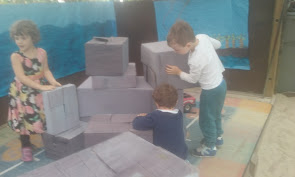 Each student stacked boxes atop one another, and then gleefully knocked them down. 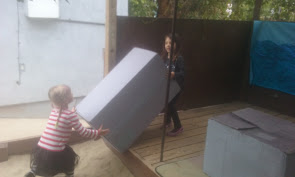 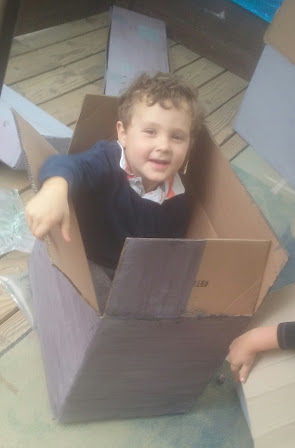 Cooking is not only a fun, engaging activity for children, but one that can be used to teach a variety of life skills. The first of these are the fine motor skills associated with working with food. Chopping, squeezing, spreading, and mixing are all fine motor skills that help develop a child’s small muscle control and eye-hand coordination. 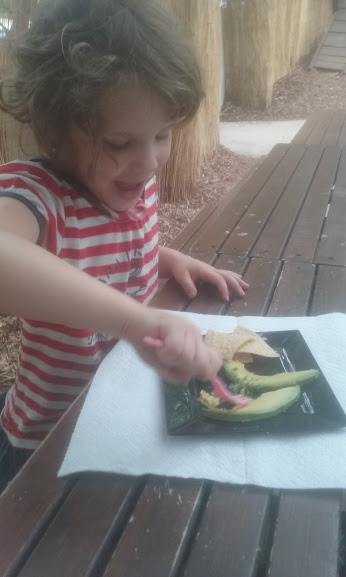 The next of these involve cognitive skills. Cooking inspires children’s curiosity, thinking, and problem solving, offering new opportunities to make predictions and observations.  Additionally, cooking offers authentic opportunities for students to understand and apply their knowledge of measuring, one-to-one correspondence, numbers, and counting.

As they follow a recipe, children organize ingredients, follow a sequence, and carry out multiple directions. Lastly, are the language skills one acquires through the act of food preparation. With its own vocabulary, cooking is a great opportunity for language development. In our classroom we take advantage of opportunities for children to match pictures to words and articulate questions inspired by their new experiences. 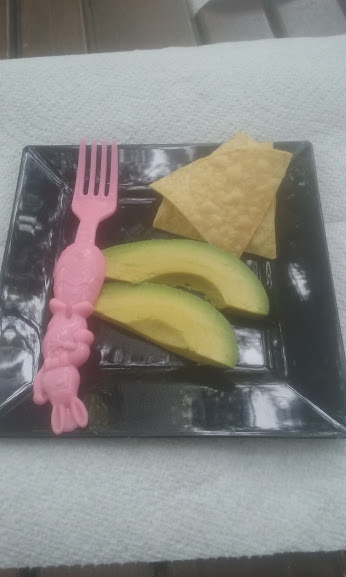 For this activity in particular, we created a very simple dish of guacamole. In every activity I do, I create numbered directions, so that students can figure out the process on their own. The key vocabulary words for this activity were “mash”, “guacamole”, and “spicy.”

Your little one learned about the ancient city of Oaxaca with this fun activity. Perchep atop a hillside, the Zapotec Ruins of Monte Albans house a city of Meso-American pyramids. These flat-topped structures provided shelter for the ancient Aztec peoples of Mexico.

To help your little one connect to this fascinating culture, they created their own pyramids out of specially-made blocks. One of the characteristics that contributes significantly to your little ones’ cognitive development, is the ability to fabricate an image they can replicate through construction.

Nurturing this form of symbolic representation plays a major milestone in your budding builder’s development. Building, balancing, and ordering through play provides a foundation for more abstract mathematical reasoning. 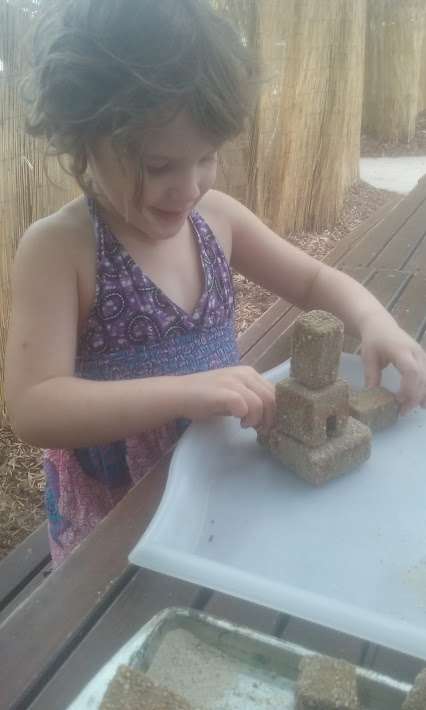 They were also told that many plants and trees grow by rivers. To tie this in to our Mexico theme, we used tin foil, rocks, plastic trees, and animals to construct our very own rivers! To accomplish this, we laid out foil onto the slope in the front yard. We then folded the edges of the foil upwards.

Following this, students placed trees, bushes, and animals around the river. Lastly, each child was given an opportunity to “pour” water down the river, watching it slosh through the foil. This activity accessed a variety of scientific concepts, such as physics (flow and motion), biology (plant an animal life), and mathematics (measurement and volume).

Mexico’s fantastically varied climatic regions mean that as well as the flourishing forests and jungles of the south, one can also experience the enjoyment of magnificent mountains and deserts in Mexico.

For this activity, we talked about the Chihuahuan Desert.

Stretching from the southwestern United States deep into the Central Mexican Highlands, this desert is one of the largest and most biologically diverse deserts in North America.

Pronghorn antelope, mule deer and grey fox roam the vast grasslands of the northern desert, while roadrunners, reptiles, jackrabbits and eagles live in the desert scrub.

To introduce the concept of a desert to your little one, we talked about what makes up a desert. 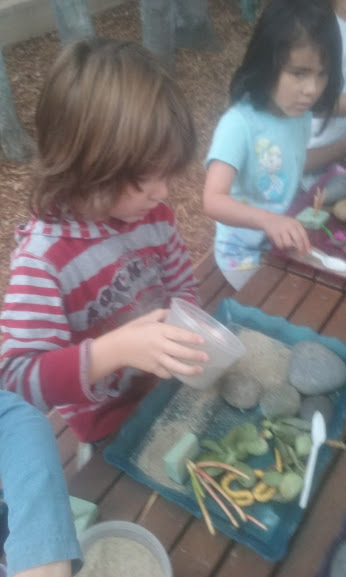 We used different vocabulary, such as “dry” and “hot”. We then discussed the different animals and plants that live there.

misscarriescorner
Create a free website or blog at WordPress.com.